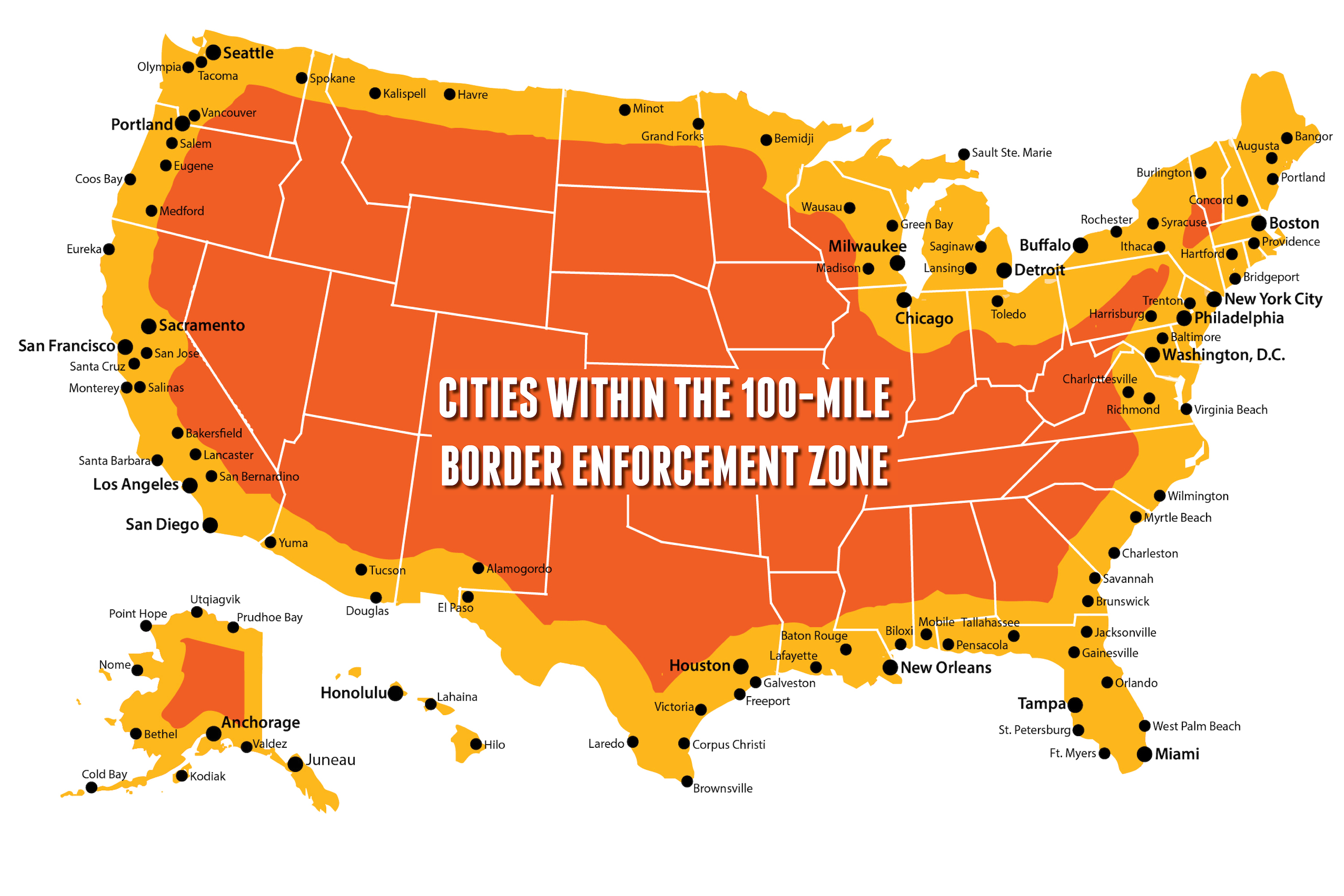 WHAT IS THE 100-MILE BORDER ENFORCEMENT ZONE?

The U.S. Customs and Border Protection (CBP), which includes the Border Patrol, is the largest law enforcement agency in the country. Their jurisdiction they claim spans 100 miles into the interior of the United States from any land or maritime border. Two-thirds of the U.S. population lives within this 100-mile border enforcement zone, including cities like Washington D.C., San Francisco CA, Chicago IL, New Orleans LA, Boston MA, & more.

Because these are considered border cities, federal border and immigration agents assert the power to board public transportation or set up interior checkpoints and stop, interrogate and search children on their way to school, parents on their way to work, and families going to doctor’s appointments or the grocery store — all done without a warrant or reasonable suspicion.

How can CBP agents do this? Unlike other federal agencies, CBP officers are uniquely granted extraordinary and unprecedented powers. These extraordinary powers state that officers are able to racially profile, stop, frisk, detain, interrogate, and arrest anyone without a warrant or reasonable suspicion. The Fourth Amendment is intended to protect all people against unreasonable searches and seizures. Every other federal law enforcement agency, except CBP, requires either a warrant or "reasonable grounds" for an officer to act without a warrant.

Border regions are often treated as zones of exception for human rights and civil rights, laying the foundation for abuse not just along our nation’s borders but across the country. That should never be the case. In these zones, border authorities assert excessive power, beyond the power of other law enforcement agencies, which leads to harassment, abuse, racial profiling and intimidation of border residents and travelers. In February 2020, Trump announced CBP employees would be granted immunity from Freedom of Information Act (FOIA) requests, and a few days later he announced he would be sending BORTAC units, the elite tactical units of Border Patrol, across the United States to major cities like New York, Chicago, and most likely many other major cities, to assist in door-to-door ICE raids and terrorizing communities of color. Most recently, BORTAC units & CBP resources were being used across the country to surveil & quell Black Lives Matter protests. Almost all of those major cities reside within the 100 mile border enforcement zone where border patrol operates with impunity. If human rights are to mean something, they must be fully protected in border communities, without exception.

The results have been deadly.

That is why the Southern Border Communities Coalition calls on Congress to adopt a New Border Vision that expands public safety, protects human rights, and welcomes people at our borders in a manner consistent with our national values and global best practices.

Part of a New Border Vision would be to establish a "reasonable grounds" standard in the statute governing the Department of Homeland Security, specifically sections (a)(1) and (a)(3) of 8 USC 1357, which would strengthen our protections against unreasonable interrogation, searches, and entry onto private property.

Cities are beginning to take action to protect their communities from inhumane & immoral border policies that impact everyone. By supporting a New Border Vision, they are taking the first step in envisioning a future that is welcoming, safe & humane for all!


WHAT YOU CAN DO TO HELP.

Support the New Border Vision, a framework for humane border policies that uphold human rights & CBP accountability. Click here to become a supporter of the New Border Vision, or add your organization to our coalition. Help rein in the extraordinary powers of the U.S. Customs and Border Protection agency by contacting your elected officials to demand that they hold CBP accountable. You can also sign up for “border_lines” our Southern Border Communities Coalition newsletter to stay informed on border-related issues.

What Customs and Border Officials Can and Can’t Do