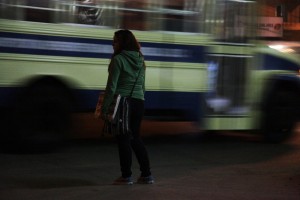 TIJUANA, Mexico — Weekday mornings at 5, when the lights on distant hillsides across the border still twinkle in the blackness, Martha, a high school senior, begins her arduous three-hour commute to school. She groggily unlocks the security gate guarded by the family Doberman and waits in the glare of the Pemex filling station for the bus to the border. Her fellow passengers, grown men with their arms folded, jostle her in their sleep.Martha’s destination, along with dozens of young friends — United States citizens all living in “TJ,” as they affectionately call their city — is a public high school eight miles away in Chula Vista, Calif., where they were born and where they still claim to live.

Martha’s destination, along with dozens of young friends — United States citizens all living in “TJ,” as they affectionately call their city — is a public high school eight miles away in Chula Vista, Calif., where they were born and where they still claim to live.

California teenagers start their mornings with crossing guards and school buses. Martha and her friends stand for hours in a human chain of 16,000 at the world’s busiest international land border. Cellphones in one hand and notebooks in the other, they wait again to cross on foot, fearing delays that could force them to miss a social studies final, oblivious to hawkers selling breakfast burritos or weary parents holding toddlers in pajamas.

In San Ysidro, the port of entry, they board a red trolley to another bus that takes them to school. They are sweating the clock — the bell rings at 8 a.m. sharp.

“Most of the time I am really, really tired,” said Martha, whose parents moved back to Tijuana because the cost of living was cheaper here than in southern California.

In the raging debate over immigration, almost all sides have come to agree on tougher enforcement at the border. But nearly unnoticed, frustration is focusing locally on border-crossers who are not illegal immigrants but young American citizens, whose families have returned to Mexico yet want their children to attend American schools.

Called “transfronterizos,” these students migrate between two cultures, two languages and two nations every day, straining the resources of public school districts and sparking debate among educators and sociologists over whether it is in American interests that they be taught in the United States. Although some Mexican families pay the steep tuition required of out-of-district students, most do not, and many that pay taxes out of their paychecks do not pay the property taxes that support public services.

Some of the students’ parents are American citizens and some are Mexican.

Students like Martha fly under the radar in some school districts, while other districts assign truancy officers to find who they are. They live with the anxiety of potentially having to lie about their residency and the very real possibility that the prize they are after — a decent education — will be taken from them. Though their exact numbers are unknown, their presence reflects the daily complexities of border life — among them, economic and educational disparities between the United States and Mexico and families splintered by deportation and unemployment.

Transfronterizos can be found from Calexico, Calif., to El Paso, where violence in neighboring Cuidad Juárez, Mexico, has led to the creation of a designated lane for 800 to 1,400 students daily, including American citizens who attend El Paso schools.

In Tijuana, Martha and a half-dozen high school seniors let a reporter accompany them on their daily commute and discussed their identity conflicts and criticisms by their American counterparts. Students, their parents and some teachers spoke on the condition of anonymity so as not to jeopardize their enrollment.

Martha’s mother, a seamstress, never got beyond ninth grade. Several days a week, she rises at 2 a.m. to claim a place for her daughter in line — a border mom, instead of a soccer or a tiger mom. Martha’s family pitches in on the mortgage for a Chula Vista house, where members of the extended family live, and pays utilities to establish residency.

Other Tijuana families rent apartments, “borrow” fake addresses from friends or create a post office box. Sometimes a relative in the district is appointed their child’s legal guardian.

“It’s stressful,” Martha says of the house that is not really her home. “You can get found out and kicked out of school. Sometimes I feel bad for lying. But I’m just going to school.”

In so many ways, they are simply teenagers, wearing sneakers and the ubiquitous white buds in their ears. In the border line, the chit-chat about hangovers and how strict their parents are could be that of young people anywhere waiting to get into a movie.

Except for the narcotic detector dogs, theCustoms and Border Patrol officers and the sign that says, “Welcome to the United States.”

Luis, a wiry high school senior with gleaming braces, was born in Los Angeles and lived there as a freshman, spending the week in his uncle’s home and weekends visiting his family in Tijuana. Homesick, he finally moved to Mexico.

“I felt bad alone,” he said. “It’s tiring, but this way I can see my family all the days.”

Now he and his 16-year-old sister get up at 3 a.m. to drive to the border with their father, a landscaper who has a green card. The teens touch down for a shower at a studio apartment the family rents in the Chula Vista school district, and they walk two and a half miles to school. Luis’s younger sister cannot join them — she was born in Mexico. So were most of Luis’s friends.

“They say, ‘Oh man, it’s too hard to wake up at 3 in the morning,’ ” Luis said, sitting in his bedroom in Tijuana, which is decorated with posters of Piccadilly Circus, a place he has yet to visit. “On the other hand,” he said, “they are jealous that I can cross and they can’t.”

Although educational outcomes have greatly improved in Mexico, low high school graduation rates and high attrition rates in the northern industrial states of Baja California and Chihuahua “hinder development of a highly educated work force,” concluded a 1997 study by the Trans-Border Institute at the University of San Diego.

“The gap between the U.S. and Mexican sides is great enough that people have a strong incentive” to cross, said David Shirk, the institute’s director.

Ana Sánchez, a Tijuana resident who works for a nonprofit organization in San Diego and pays United States income tax (although not property tax), wanted her two children to be fluent in English and enrolled them in a public school close to her job. “I know that in the future it’s going to be a plus for them,” she said.

Initially, “trying to be honest,” Mrs. Sánchez told the district that her daughter lived in Tijuana. But when told she would have to pay $800 a month in tuition, “that’s when I got added to the electric bill at a friend’s address,” she explained.

For educators, determining whether a student meets residency requirements can be a thorny task, with rules varying from district to district and state to state. In San Ysidro, families must provide a mortgage or rental agreement and show utility bills in their name. Over the past two years the district has sent “letters of exclusion” to more than 20 families. In some cases, fraudulent documents were discovered. Manuel H. Paul, the superintendent, said educators were attuned to “red flags” like a phone call from a school nurse that reaches a disconnected number.

“The student will say, ‘We live in Tijuana,’ ” Mr. Paul said. “Children most of the time don’t lie.”

In 1982, the Supreme Court established that schools cannot inquire about a family’s immigration status. Ed Brand, superintendent of the Sweetwater Union High School District in Chula Vista, says an American citizen living outside the county would pay tuition of $7,162.

“We’re not the I.N.S.,” he added, referring to the former Immigration and Naturalization Service. “Can one get by us? I imagine one can.”

In nearby Calexico, a truant officer was dispatched to photograph students crossing the border, but the practice was deemed “an exercise in futility” and discontinued, said Richard Fragale, the superintendent of schools. He estimates that between 100 and 200 students cross each day, most not paying tuition. Ultimately, there are painful decisions for the district. Recently, he said, two parents were deported, leaving two children, both American citizens, in limbo.

“What do we do with these youngsters?” he said. “Philosophically, as an educator, if a young person comes to the door, we should educate them.”

In Ajo, Ariz., the state education office fined the district $1.2 million in May 2010, for the cost of educating 105 students crossing over from Mexico. The district has since tightened its residency requirements.

The issue is fairness, whether a student lives in Mexico or just outside a preferred school district in the United States, argues Steven A. Camarota, the research director for the Center for Immigration Studies in Washington, which favors limits on immigration. The possibility that these individuals could “pay enough in taxes to cover the costs of consumption of public services is basically zero,” he said.

Martha and her friends view classmates who live in the district as coddled couch potatoes. They don’t have to deal with jeering workers at the border cursing them for cutting in line. Or say “wake me up” to the Tijuana taxi driver who drives them home after dark.

Jesús travels 20 miles from Tijuana, on a twisting road known for robberies. He plans to study gastronomy. “I am just trying to get ahead and become someone important in life,” he says. “It’s a big responsibility making sure you get to school.” Five tardys can mean four hours of Saturday school and an F in citizenship.

“You can kill their future,” says one of Jesús’s teachers, who does not mark him late when he knocks shyly on the classroom door 10 minutes into first period.

Martha has crossed the border on and off since she was 5. Her life has its own ebb and flow, as well as the occasional undertow. In Tijuana, “sometimes people think we’re higher than them,” she says, because she attends an American high school. But as a Mexican in San Diego, “they look you up and down.” Divulging the particulars of their lives can be tricky business. “You can’t really rely on most people,” Martha says.

Rising at 3 a.m., Luis will sometimes fall asleep in his sixth-period world history class. “The teacher gets super-angry,” he said. ‘”You don’t tell those kind of teachers you cross.”

He shares his story sparingly with a few trusted Latino teachers. “Some of them crossed, like you. They want things to be better for you. But,” he allows, “that is not true of everyone. Some think we’re wasting tax.”

One teacher in Chula Vista, whose name was withheld to protect students in his class, including Martha, said, “I can’t draw all I want from her. Her intelligence is hidden away by her tiredness.”

Yet teachers and guidance counselors say that despite the academic challenges, students who get up at 4 a.m. to be at school show signs of becoming resilient leaders. “They know who are they are and what they want,” the teacher observed. “They’re not going to be working at Jack in the Box. They’re go-getters.”