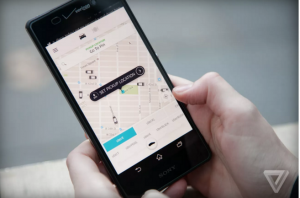 Just in time for spring break, Uber announced today that it would start taking passengers across the US-Mexico border for the very first time, from San Diego to Tijuana. But getting back will be trickier, thanks to the regulations that govern ride-hail companies like Uber.

Before, ride-sharing passengers would have to take a car to the border, get out, cross into Mexico, and then call another car to take them into Tijuana or somewhere on the Baja peninsula. Now riders equipped with the necessary documentation — i.e., a US passport — can take the same car all the way into Tijuana. Uber calls it "a new way to foster cross-border business opportunities by facilitating accessible and reliable transportation." It could also facilitate accessible drinking destinations for Southern California college students.

The ride back into the US is still a hassle, thanks to limitations on commercial activities. Uber is telling riders to take a car to the border, cross by foot using the pedestrian bridge, and then hail another vehicle.

And while the company is promoting this new route as "safe and reliable," it's not clear whether the US government would agree. The State Department issued a travel warning in January for Americans considering make a trip into certain areas of Mexico, including Tijuana, noting an increase in the homicide rate over the last year. "While most of these homicides appeared to be targeted criminal organization assassinations, turf battles between criminal groups have resulted in violent crime in areas frequented by US citizens," the agency says.