Congress wants to water down CBP hiring standards through polygraph loopholes, which is dangerous and risks employing CBP officers and agents who jeopardize national security and public safety. Call your Congressmember to stop this from happening. 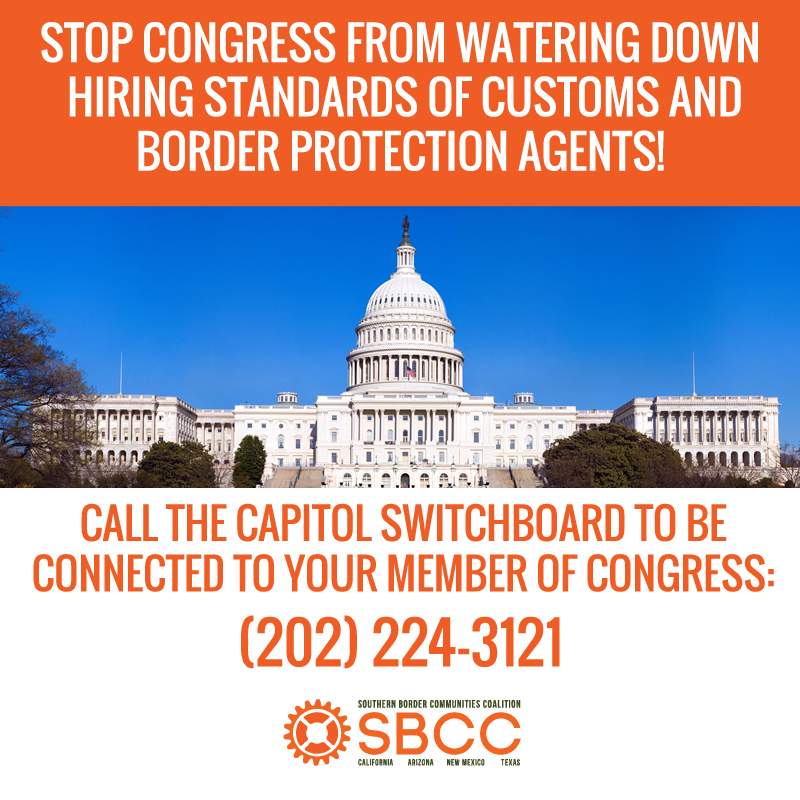 Use the script below

My name is ___________ and I live in _____________.  I am calling to ask Congressmember __________ to urge Democratic leadership to NOT move HR 2213 (the Anti-Border Corruption Reauthoriization Act) on suspension and for the Congress Member to oppose the bill. HR 2213 would eliminate critical polygraph requirements for some CBP applicants. Waiving the polygraph test will eliminate accountability for a corruption-prone agency, as well as threaten public safety and national security.

The Southern Border Communities Coalition joined other organizations in a letter opposing the watering down of CBP hiring requirements. Read the letter below:

We, the undersigned organizations, urge you to oppose the House Anti-Border Corruption Reauthorization Act (H.R.2213) and the Senate Boots on the Border Act (S. 595) - measures that would eliminate critical polygraph requirements, widely used by federal law enforcement, for some Customs and Border Protection (CBP) applicants. CBP, an agency with serious corruption and integrity issues, cannot be trusted to take shortcuts by weakening hiring standards; doing so will threaten public safety and national security.

Watering down CBP hiring standards through polygraph loopholes is dangerous and risks employing CBP officers and agents who jeopardize national security and public safety; compromising the prone to abuses such as excessive uses of force and sexual assault.  In response, Congress enacted the Anti-Border Corruption Act of 2010 that mandated polygraphs for

The polygraph is an integral component of CBP vetting and has prevented corrupt or corruption-prone applicants from being hired and deployed.   fail the CBP polygraph and hundreds have admitted to serious criminal activity during the screening process. Former CBP head of Internal Affairs James Tomsheck confirmed that applicants have revealed engagement with drug cartels and smuggling activities during their polygraph exams. He also stated that “[s]ome of the most significant corruption cases and excessive use-of-force problems were CBP officers or Border Patrol agents who had been in the military and had served in combat.”

CBP is facing staggering integrity and professionalism challenges. According to the Government Accountability Office, between 2005-2012 there were 2,170 reported incidents of arrests of CBP agents for misconduct. That’s nearly one CBP officer or agent arrested for misconduct every single day for seven years.

DHS’s own CBP Integrity Advisory Panel of outside law enforcement experts concluded in 2015 that “there is data indicating that arrests for corruption of CBP personnel far exceed, on a per capita basis, such arrests at other federal law enforcement agencies.” In its final reportissued in 2016, the panel recommended that current polygraph testing be expanded to include post-employment tests that are best practices at the FBI and agencies in the U.S. intelligence community.

CBP has a horrendous track record of abuse and impunity. Since January 2010, 50 people have died in encounters with CBP agents. Sexual misconduct cases at a rate significantly higher than other law enforcement agencies.

CBP undoubtedly faces recruitment and retention problems. But increasing hiring at the expense of the public’s trust, creates serious national-security vulnerabilities, jeopardizes public safety, and degrades the quality of life for border residents.