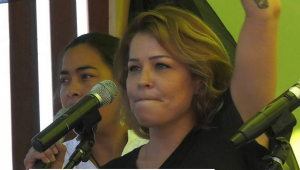 As the leader of a support network for those affected by the U.S. Border Patrol’s use of force, Gutierrez knows her husband was one of the lucky ones. But after José survived a coma and traumatic brain injuries attempting to cross back into Arizona after being deported, he hasn’t been the same.

“He has multiple personalities now because of the trauma he sustained. I don’t ever know what my day will look like,” Gutierrez said.