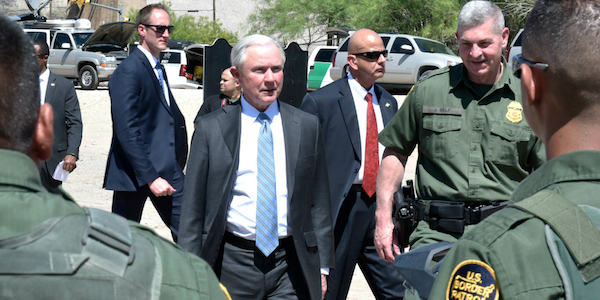 SAN DIEGO, CA -- Today, Attorney General Jeff Sessions visited the southern border region to announce the Trump Administration’s intention to separate children from their parents and criminally prosecute all unauthorized border crossers, regardless of whether they are applying for asylum or not.

These cruel and inhumane policies could end up splitting thousands of families, including those who are fleeing persecution, and would add to the hundreds of children that have already been taken away from their parents in the southern border region.

Last week, the Administration announced it would add 35 new immigration attorneys and 18 judges to the southern border in an effort to turbocharge Trump’s deportation force.

Sessions is the latest high-profile administration official to visit the southern border region to try to justify more walls, more agents, and more detention beds, when what border communities need is more schools, more infrastructure, and more health clinics. President Trump visited his border wall prototypes in San Diego in March, followed by separate visits to California, Arizona, New Mexico, and Texas by other members of his Administration.

“Threatening to prosecute and incarcerate migrants, including parents of children, is neither a practical nor a humane response to people who may be seeking refuge or who may not have a line to stand in to apply for legal status. An enforcement-first and enforcement-only approach is not the answer. It does not reflect our values of inclusion and compassion and does nothing to address an outdated and insufficient immigration system.

Sessions and his colleagues speak in rhetoric rather than reality about the southern border region and the need for more border militarization. Here is the reality: the southwest border region is one of the safest in the country, unauthorized migration is at historic lows, and most asylum seekers are coming to the ports of entry to present themselves directly to agents.

Instead of draconian responses, we need common-sense solutions that take into account the real needs of the 15 million people who live in the southern border region and treat people with dignity and respect.”

“Not a single top official from the Trump Administration has bothered to talk to border communities to see what we really need. The Trump administration just talks at us, without taking into consideration the impact of hyper-militarization on our families, friends, and neighbors. Jeff Sessions is no different. A thriving and diverse region such as San Diego should not be treated as a mere backdrop for talking points that are disconnected from reality.

We are ready to have a real conversation about the real needs of border communities. We are also ready to talk about real immigration reform to provide pathways for people to contribute to this country, rather than criminalizing them and militarizing our communities.”