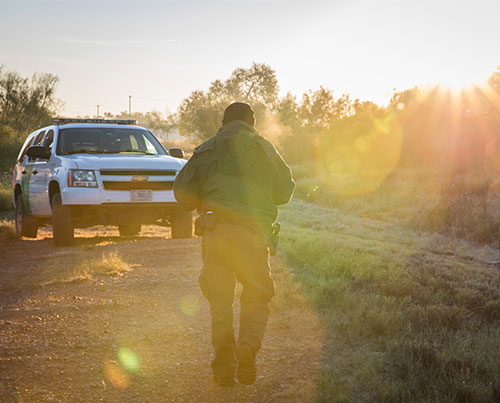 SOUTHERN BORDER, February 23, 2022 — Over the weekend, another person was killed by a border agent, and Customs and Border Protection (CBP) wasted no time in undermining the investigation, underscoring ongoing concerns about the integrity of misconduct investigations at the nation’s largest law enforcement agency. The incident also raises questions about the role played by Border Patrol Critical Incident Teams (BPCITs), which may be the largest shadow police units operating in the federal government today.

On Saturday, February 19, 2022, the Cochise County Sheriff’s Office (CCSO) disclosed that a migrant was killed by a Border Patrol agent near Douglas, Arizona. The CCSO removed that statement in subsequent press releases, stating instead that the migrant was seriously injured and succumbed to his injuries. When asked about the removal, “the public information officer explained that it had not been reviewed by the proper channels,” raising questions about the change in narrative and who influenced it, including CBP and the BPCIT. The medical examiner has now made clear that the migrant died of gunshots fired by the border agent.

There are multiple red flags in this investigation. Instead of the CCSO processing the scene immediately, they waited a day. Even though the other migrants in the area were taken by agents to a Border Patrol station right away, CCSO did not recover the body of the deceased migrant until the following day. The CCSO does not appear to have collected any forensic evidence at all until the next day, including from the agent involved (clothing, fingerprints, ballistics or any other relevant evidence). Instead, they ceded the incident area to border agents who could have tampered with the scene. Moreover, the fact that other migrants (possible witnesses) were taken to a Border Patrol station for “interview purposes and further processing,” raises deep concerns. This is what happened in Del Rio last year in a use of force incident involving Haitian migrants — witnesses were taken into custody by border agents and processed (deported) without ever having been questioned by independent investigators. Despite promises from the Biden administration that the incident would be fully investigated, the Office of Inspector General declined to review the matter and referred it back to CBP, which rarely disciplines its agents.

There can be no independent investigation of border agents with the involvement of the agency that employs them, especially if BPCITs are involved, as they usually are. As SBCC detailed in a letter to Congress in October 2021, BPCITs are unauthorized investigators who mitigate the liability of agents. They are not neutral fact finders and their handling of any part of an investigation undermines it. The fact that the CBP Office of Professional Responsibility (OPR) is reportedly investigating is no solace given that OPR uses BPCITs to collect evidence despite the inherent conflict of interest. Until OPR ceases to do this, they are compromised.

Just recently, in 2021, when a border agent shot Marisol García Alcántara in the head in Arizona, the BPCIT pushed the Nogales Police Department to the perimeter to control traffic while it controlled the scene. There, too, witnesses were taken into Border Patrol custody and no one was ever questioned about the shooting. Instead, the witnesses and Marisol herself were deported. Although OPR was reportedly investigating, their reliance on and use of the BPCIT in their investigation compromised it. No meaningful investigation was ever conducted.

For decades, BPCITs and other configurations within Border Patrol have acted to protect agents at the expense of the public. For example, in the killing of Jose Antonio Elena Rodriguez in 2012, it was revealed in court records that the BPCIT collected all the evidence, including the gun used, the shell casings, the photos of the scene, and the rocks allegedly thrown. It was further revealed that the evidence had been corrupted thoroughly. Border agents drove through the scene of the incident before it was secured, they walked through the shell casings before they were collected, and they never collected DNA on the rocks that were allegedly thrown and which the agent used to justify the shooting. Former CBP Assistant Commissioner for Internal Affairs Tomsheck later stated that this was “a good example of BP injecting false information or manipulating information to give the impression that this was a good shoot.” See SBCC letter.

Every couple of weeks, another person is killed in an encounter with border agents. Since 2010, hundreds of people have died as a result and no one has been held accountable. And those are just the cases we know about. Those killed include U.S. citizens, migrants, and border residents, and they include men, women, and children. In the nearly 100-year history of Border Patrol, agents have enjoyed near total impunity — no agent has ever been successfully prosecuted for killing someone while on duty. Ever.

It’s long past time for the impunity to end. We call on the Biden administration to turn the page on impunity once and for all, beginning with shutting down BPCITs. We also call on Congress to fully investigate the impunity enabled by BPCITs andCBP, and strengthen the integrity of investigations through legislation.

This is another horrific tragedy at the hands of Border Patrol agents. We urge our congressional members in Arizona to demand a full and transparent investigation into this matter. So far, we have only seen problematic and questionable actions taken by officials who are investigating this incident. It is important for the public to know that this death was investigated by agents authorized to investigate (not BPCITs), that the Cochise County Sheriff's Department is conducting a separate, independent and full investigation, and that the FBI also conducts an independent, comprehensive and public investigation.

Border Patrol has yet again taken the life of another person in our beloved borderlands. Our hearts mourn for the family and loved ones of this person. The secrecy and impunity in which this agency operates is a public safety concern. We demand accountability and transparency. We demand justice for this person's family.

Yesterday, at our weekly Healing Our Borders Prayer Vigil, we added a cross for the man who was shot and killed by a Border Patrol agent.  His cross will join the crosses of almost 350 persons who are known to have died in Cochise County — victims of our government's cruel “prevention through deterrence” policy.  We demand full transparency and accountability of the circumstances that led to his death, and we must demand an end to cruel policies and misconduct that cause suffering and take the lives of hundreds of sons and daughters, mothers and fathers each year.