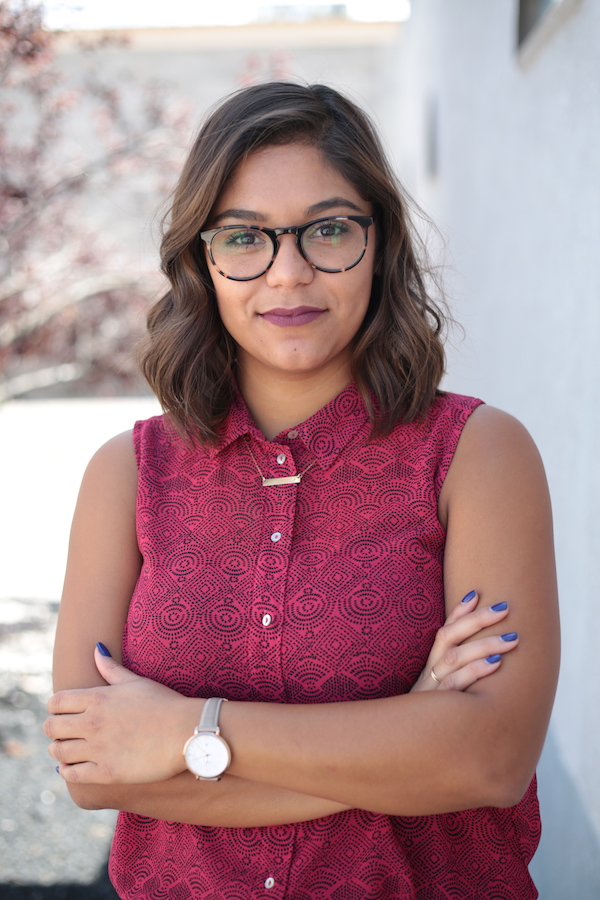 “I’m a small-town girl!” laughs Johana Bencomo, Director of Community Organizing at New Mexico Comunidades en Acción y De Fé (NMCAFé), a faith-based organization located in Las Cruces, New Mexico. Though much of her life has been spent in small towns, Johana brings big goals and aspirations to her work within NMCAFé, and as the newly-appointed Co-chair of the Southern Border Communities Coalition (SBCC).

Johana brings a special understanding of the southern border region and its unique perspectives thanks in part to her personal experience as an immigrant. Johana emigrated to the US with her family when she was 8 years old from Chihuahua, Mexico, and settled in the small town of Holyoke, Colorado. Johana became a citizen at 16 years old, and found that the possibilities for her life opened up dramatically.

“College became a reality for me,” recalls Johana.

Johana decided to attend college in Las Cruces, New Mexico, where she graduated with a degree in government, with an emphasis in Latin American Studies.

It was in Las Cruces that she first interned with NMCAFé in 2013, and found her calling in organizing. After finishing her Masters in Social Work, Johana returned to NMCAFé, and has been with them since.

“I’ve never felt so aligned with my life’s purpose doing this work...the work feeds my soul.”

SBCC sat down with Johana to talk about NMCAFé, Southern New Mexico and its challenges, its beauty, and more.

Tell us about your work with NMCAFé. How does your faith play a role in your work?

NMCAFé has been around since 2009. It’s a multi-faith, multiracial organization, with an objective to improve quality of life for Doña Ana County residents. NMCAFé is part of the Faith in Action National Network, the largest faith-based organizing network in the United States, so we get to work with a vast network of other organizations with similar philosophies. I was raised catholic, but left the church not feeling seen within it. It wasn’t until Pope Francis that I started to feel a connection to my faith again. For me, the beauty of NMCAFé is that I get to work with people from many different faiths. However, regardless of their faith, there is a thread in common with everyone I work with; they all share a serious commitment to Social Justice. These folks are standing in the margins, so that no one stands alone. Thanks to them, I see how big a role faith plays in community organizing.

Tell us about your border community and what sets it apart from the rest of the southern border region.

In Southern New Mexico, specifically Doña Ana County, there’s a value and respect for binationalism. Some people have been here for generations, and some are more recent immigrants. The community here is very welcoming, and, even though they have a lot to fight for, there is such a beauty to New Mexico, and its people.

What are the challenges your border community faces?

Our community is one of the only communities with internal border patrol checkpoints beyond the city limits, so we’ve really seen and felt the brunt of border militarization. There are many colonia communities here; a colonia is a an unincorporated community lacking basic infrastructure, such as paved roads, potable water, even safe and sanitary sewage treatment. These communities are often neglected, and they are often predominantly-immigrant communities, with many mixed-status families.

Can you talk to us about the struggles your border community faces with regard to the further militarization of the border and the policies from this administration?

One of the biggest challenge is that the rest of the state doesn’t acknowledge the issues the border communities face. They don’t acknowledge New Mexico is a border state, and that the border is more than just a line in the desert, it’s diverse and dynamic communities. It’s easy for the rest of the state to have a false sense of security, without acknowledging who is being impacted the most by the further militarization of the border. We at NMCAFé want to encourage people to see the border as more than just the wall, and when we think about the issues many people care about, we need to recognize the role border communities play in those issues. For example, lots of people care about Dreamers, and the issues they face, but don’t realize that 1 out of 5 Dreamers live in border counties. What happens in border communities should be a national priority.

I wish people knew that our communities are diverse, vibrant, and have so much potential. We need people to invest in them, not exploit them. Our people are hungry to be seen in a different way.  We are desert people; we are resilient and we are warm, we are dynamic. The wildlife in New Mexico also reflects this; our deserts are some of the most biologically diverse places in North America. We care so deeply about our communities, we want the opportunity to thrive.

What are your hopes for the future of your border community? How do you envision your role in SBCC as part of that future?