SCOTUS Rules To End The "Remain In Mexico" Program

Jun 30, 2022
SOUTHERN BORDER, June 30, 2022 — Today, the U.S. Supreme Court issued a decision in Biden v. Texas that allows the Biden Administration to rescind the Trump-era “Remain in Mexico” program, formally known as the Migrant Protection Protocols. While the 5-4 ruling is a welcome outcome, there is still work to do to ensure due process for people seeking protection or refuge in the United States. There should be a universal standard for humanitarian treatment at our borders, without exceptions. The Remain in Mexico program forced people seeking safety at our southern border to wait in Mexico while their cases were pending, putting thousands of people at risk and in compromising positions.  Continue reading

Cruel Border Policies Forced Migrants to their Deaths in Texas

Jun 28, 2022
SOUTHERN BORDER, June 28, 2022 — 50 people died in a speculated attempt to cross the US-Mexico border. The bodies of forty-six people believed to be migrants were found dead on Monday in and around an abandoned tractor-trailer near San Antonio Texas. Over a dozen others, including children, were taken to the hospital alive but suffering from apparent dehydration and heat exhaustion where another six died today and four lie in critical condition. Seeking asylum is a human right and legal form of entry under U.S. law. However, the current border expulsion policies of Title 42 and the “Remain in Mexico” program, both wielded by Trump before Biden, have effectively closed off the border. These policies follow decades of escalating border militarization and prevention through deterrence tactics that force migrants to take more dangerous, and often deadly, routes to seek refuge in the United States, resulting in these and countless other preventable deaths. In recent weeks alone, our communities have mourned the eleven Haitian migrants who lost their lives trying to reach Puerto Rico, nine migrants who drowned in El Paso irrigation canals in early June, and many others who lost their lives to drowning, dehydration, heat exposure and falling from the border wall. Continue reading

May 06, 2022
SOUTHERN BORDER, May 6, 2022 — Today, U.S. Customs and Border Protection (CBP) issued a memo announcing the elimination of Border Patrol Critical Incident Teams (BPCITs), which have repeatedly interfered with law enforcement investigations of agents involved in the killing and harming of community members. The Southern Border Communities Coalition (SBCC) commends CBP for taking this action and acknowledges the leadership of Commissioner Magnus, who was responsive to community concerns about BPCITs. It is no easy feat to change a longstanding and problematic practice within the agency, and the Commissioner has taken an important step.  Continue reading

May 03, 2022
SOUTHERN BORDER, May 3, 2022 — Today, family members of those who have died or have directly endured brutal and horrendous abuse by Border Patrol agents called for an end to the cover-ups and obstructions committed by Border Patrol Critical Incident Teams (BPCITs). Each of the powerful stories shared today reflect the tragic and emotionally devastating reality of living without the justice and accountability that their families deserve. Continue reading

Apr 06, 2022
SOUTHERN BORDER, April 6, 2022 — The Southern Border Communities Coalition (SBCC) strongly urges senators to vote “NO” on any anti-immigrant amendment that may be tacked onto a new, bipartisan COVID relief bill tentatively scheduled for a vote this week.  Continue reading

Defund Hate: Instead of Investing in What Immigrant Communities Truly Need, Congress Prepares to Greenlight Billions to Fund ICE and CBP, Abusive and Deadly Agencies

Mar 09, 2022
Washington, DC – In the dead of night, Congress released the finalized text for its $1.5 trillion federal funding bill, which increases Trump-era spending levels for Immigration and Customs Enforcement (ICE) and maintains Customs and Border Protection (CBP) funding levels roughly the same. Included is funding to detain 34,000 people in abusive ICE detention and an increase of $10 million to ICE’s so-called “Alternatives to Detention” (ATD) programs which further restrict, surveil, and harm immigrant communities and have not resulted in fewer people in detention. The  bill also fails to rescind billions of construction dollars for Trump’s lethal border wall. The House is expected to vote on the bill today, with the Senate following next week after a 4-day extension. Continue reading

Feb 23, 2022
SOUTHERN BORDER, February 23, 2022 — Over the weekend, another person was killed by a border agent, and Customs and Border Protection (CBP) wasted no time in undermining the investigation, underscoring ongoing concerns about the integrity of misconduct investigations at the nation’s largest law enforcement agency. The incident also raises questions about the role played by Border Patrol Critical Incident Teams (BPCITs), which may be the largest shadow police units operating in the federal government today. Continue reading

In Response to Congress, Border Patrol Fails To Cite Any Authority to Investigate Its Own Agents

Feb 09, 2022
SOUTHERN BORDER, February 9, 2022 — Last month, ten House and Senate committee and subcommittee chairs sent a letter to the Government Accountability Office (GAO) requesting an investigation into the activities of Border Patrol’s Critical Incident Teams (BPCITs), which are believed to be operating without any authority and as cover-up teams to protect abusive border agents at the expense of the public.  Continue reading

Dec 15, 2021
SOUTHERN BORDER, December 15, 2021 — Six months ago a Border Patrol agent shot Marisol Garcia Alcantara on June 16, 2021 in Nogales, Arizona, while she was sitting in the back seat of a vehicle that Border Patrol agents detained. Now Marisol, with the help of her attorney, is filing a Federal Torts Claim Act (FTCA) claim against the Border Patrol. Despite CBP policy prohibiting the use of firearms solely to disable a vehicle, an agent fired a bullet at the vehicle into Marisol's head. Fortunately she survived to tell her story and seek justice. Continue reading 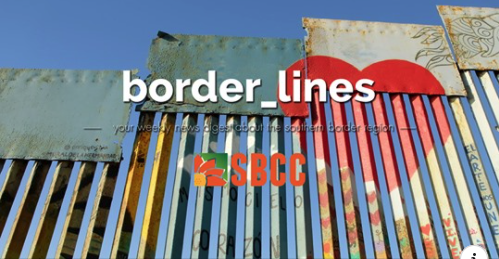 Get caught up on issues and policies that shape the southern border region. Every Friday, from San Diego, CA, to Brownsville, TX, and everywhere in between, straight to your inbox.