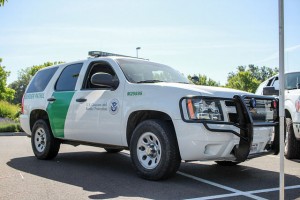 A high degree of corruption in the U.S. Border Patrol presents a national security threat, found an independent task force.

After 9/11, the U.S. Border Patrol doubled in size from around 10,000 to more than 20,000 agents. And while money was appropriated for the expansion, very few resources were allocated to the oversight of those agents.

Border Patrol critics say that in a rush to hire more boots on the ground, properly vetting potential agents and investigating claims of abuse became a low priority. Isabel Garcia from Derechos Humanos, a human rights group, says today, the border is more like a combat zone.

“We grew into the state of hate." Garcia said. "And part of this consequence delivery system has been to massively increase the border enforcement apparatus, mainly the Border Patrol, in unprecedented level."

The head of Customs and Border Protection, Gil Kerlikowske said he has inherited a major problem when he took the job in 2014.

“…and that is the significant concern about corruption.”

Kerlikowske created a 10-member "I". It is headed by William Bratton, the former chief of the Los Angeles Police Department and now the police commissioner of New York City. He brought more than 40 years of law enforcement experience to the table.

In the report, he warns that drug cartels routinely attempt to target, recruit and corrupt law enforcement personnel. He said corrupt border agents who break the law are criminals and that prevention is key.

“The focus always needs to be on the prevention of crime,” Bratton said. “We certainly always want to improve our ability to respond to it, but we don’t want the response to overwhelm the basic mission.”

That basic mission, said Bratton, is to protect the U.S. border to the south, north and at all ports of entry.

“Plus, making sure that we have the integrity and the trust and the credibility of the people we serve as addressing as aggressively as possible the issue of corruption,” Kerlikowske said.

To that end, the panel recommended 39 major changes. They range from prosecuting agents who have accepted bribes to more respectful and humane treatment of immigrants.

“For example, CBP has increased investigative staffing of CBP’s Office of Professional Responsibility (formerly the Office of Internal Affairs) and has obtained criminal investigative authority to address corruption, misuse of force, and other serious misconduct,” said Dan Hetlage, the deputy director of CBP’s media division.

While many see this as a major step towards addressing the claims of corruption and abuse by Border Patrol agents, others see it as a smoke screen to silence the critics.

And few are more critical of Border Patrol agents than Tucson attorney Bill Risner. He represented Jesus Castro, a Mexican citizen in this country illegally, who was shot in the back by a Border Agent. Castro was partially paralyzed.

The agent, Abel Canales, was cleared of wrong doing by Border Patrol, but later arrested in another case for accepting more than $10,000 in bribes from a drug cartel.

Risner later sued the Border Patrol in civil court and won $500,000 judgment for his client. He said it’s a good thing that the new Integrity Advisory Panel is made up of non-border patrol law enforcement individuals.

He and many other critics of the Border Patrol’s track record say the most they can do now is reserve judgment until the recommendations on paper actually become policy.