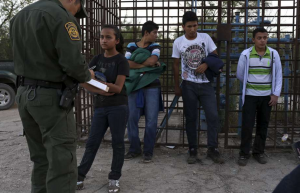 McALLEN — A controversial program that targets unauthorized immigrants for criminal prosecution has clogged border courts, cost billions to imprison them, and torn apart tens of thousands of families while doing little to deter illegal immigration, according to a new report published Wednesday by Grassroots Leadership and Justice Strategies.

The report, “Indefensible: A Decade of Mass Incarceration of Migrants Prosecuted for Crossing the Border,” highlights what it says are the failures of Operation Streamline, a decade-old initiative of the Department of Homeland Security and Department of Justice that handles illegal border crossing as a federal crime and treats unauthorized immigrants as criminals.

“This policy has resulted in a human rights disaster,” said the report’s co-author Judith A. Greene, director of Justice Strategies, an organization that supports criminal justice reform. “It’s ineffective, it’s wasteful and it’s failed by every measure.”