How effective is border security? 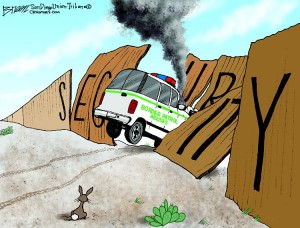 By Alex Nowrasteh and Patrick Eddington

Border security is a major issue this election cycle. Republican Presidential candidates Donald Trump, Marco Rubio and Ted Cruz are all calling for a border wall and vast increases in Border Patrol to stop the flow of illegal immigrants. The truth is, over the past 15 years, we’ve dramatically increased border enforcement. And instead of needing more, we may be going too far already.

But the rapid expansion of Border Patrol has multiplied their use of controversial tactics – like military-style Forward Operating Bases (FOB) in remote areas and interior checkpoints – that are finally be questioned (off the campaign trail, at least) for their civil liberties violations and ineffectiveness. They need even more scrutiny.

A new federal report written by Department of Homeland Security inspectors found some serious problems with these FOBs. The facilities are sometimes unlivable and poorly maintained. Potable drinking water is unavailable – a serious problem in the desert. At least one FOB is not even continuously manned and many others don’t even have functional security cameras, undermining their very purpose.

If the FOBs are so necessary for controlling the border then Border Patrol should be maintaining them better. But even aside from maintenance, are they even effective? How many human traffickers, drug smugglers, or illegal immigrants have been apprehended as a result of these FOBs? Are they a wise investment of scarce security resources? Are there violations of human rights that occur in these remote areas that are unreported? These are important unanswered questions and we cannot just take Border Patrol’s word for it. They need to be investigated.

Another controversial Border Patrol tactic is the widespread use of checkpoints inside of the United States – some of them operating almost 100 miles from the border. These checkpoints don’t just stop illegal immigrants; they stop everyone driving on the roads. At best, they waste the time of motorists and occasionally arrest a real criminal. At worst, they violate Fourth Amendment rights on a terrifying scale without contributing to border security.

One such checkpoint in the Arizona town of Arivaca is 11 miles from the Mexican border. Established about a decade ago, residents of this small town have been protesting it for years. Warrantless searches, property destruction and other alleged rights violations by Border Patrol have escalated to the point of a federal lawsuit. Tensions are running so high that local residents are operating their own surveillance operation to watch the watchmen.

These problems were predicted forty years ago. The 1976 Supreme Court decision in U.S. v. Martinez-Fuerte allowed Border Patrol to establish these checkpoints 100 miles from the border to help immigration enforcement, but not to be a Constitution-free zone. In prescient dissents to that case, Justices Brennan and Marshall predicted the very violations that the residents of Arivaca are now complaining about.

Interior checkpoints raise serious civil liberty concerns but, just as worryingly, it’s impossible to judge whether they are even effective at stopping illegal immigration. The last serious audit of these interior checkpoints was completed in 2005 – when Border Patrol was 45 percent smaller. The Government Accountability Office investigated these checkpoints and published their findings in 2009. The big result of these audits is that Border Patrol isn’t keeping enough records or data to even tell if their efforts are effective.

The scant information we have shows gross Border Patrol inefficiency. In 2008, 4 percent of Border Patrol agents were assigned to such checkpoints but they only apprehended 2 percent of the illegal immigrants detained that year. The situation is even worse in the vicinity of Arivaca in Southern Arizona.

A 2013 ACLU report, “Record of Abuse,” analyzed Border Patrol records for the Southern Arizona border sectors called Tucson and Yuma. Tucson Sector checkpoints only accounted for 0.67 percent of the sector’s total apprehensions. Nine out of the 23 checkpoints produced zero arrests of deportable illegal immigrants. In the same year, checkpoints in the neighboring Yuma Sector arrested eight U.S. citizens for every non-citizen. Shockingly, that ratio is an improvement over 2011 when 11 U.S. citizens were arrested for each non-citizen.

One checkpoint in Yuma Sector that is 75 miles from the border reported a single non-citizen apprehension in three years but multiple complaints by Americans who allege that their civil rights were violated. The ACLU report, based on Border Patrol documents, shows a clear need for a comprehensive audit of the checkpoints and a complete reevaluation of their very existence.

The border is not a war zone where civil liberties need to make room for security concerns. The DHS investigation of Border Patrol Forward Operating Bases is a small first step that needs to go further and target interior checkpoints too. Every new Border Patrol tactic should be justified by a rigorous cost-benefit analysis to make sure taxpayer funds are spent effectively and that civil rights aren’t violated. Building a wall along the border with Mexico and other harebrained schemes should be subject to the same analysis. That is the minimum we should expect from our government and serious presidential candidates.