Family to file petition in DC in 2010 border death 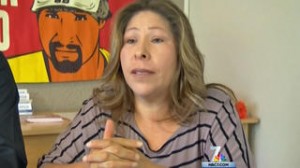 The family of Anastasio Hernandez Rojas will file a petition with the Inter-American Commission on Human Rights.

The family of Anastasio Hernandez Rojas, a San Diego man who died following a confrontation with Border Patrol agents in San Ysidro, will file a petition with the Inter-American Commission on Human Rights in Washington, D.C.

The petition, which will be filed in conjunction with law experts from UC Berkeley’s International Human Rights Law Clinic and advocates with the Southern Border Communities Coalition in San Diego, is the family’s latest attempt to bring attention to Hernandez Rojas’ death.

The Justice Department last year said it would not bring criminal charges against the federal officers involved, citing a lack of evidence in the case.

Hernandez Rojas was apprehended at the San Ysidro Port of Entry in May 2010, allegedly for attempting to cross the border illegally. He was shot with a Taser and beaten and died a few days after his arrest.

Border Patrol agents have said Hernandez Rojas was combative and that force was necessary to subdue him, according to court documents. An autopsy found that drugs and a heart condition contributed to his death.

A witness video of the struggle showed several agents surrounding Hernandez Rojas as he laid on the ground in handcuffs, footage that was later featured in a PBS documentary. Some of the blows and the Taser shots occurred while he was handcuffed, according to official reports.

“Anastasio’s family is determined to hold the U.S. government accountable for failing to deliver justice,” advocates with the Southern Border Communities Coalition said in a statement.

The Inter-American Commission on Human Rights is an independent part of the Organization of American States, whose mission is to promote and protect human rights in America. Created by the organization in 1959, the commission is composed of seven independent panel members.

After a petition is filed, the commission investigates the matter and can then make recommendations to the country responsible “to prevent a recurrence of similar events,” according to the organization’s website.