Crossing the Line Tells of Love, Culture Across Borders 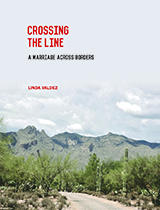 Tucsonan Linda Valdez has been studying politics in Tucson and Arizona for decades.

She is a columnist for the Arizona Republic and she often explores – and weighs in on – the roiling federal and state debates about border and immigration policy.

But she hasn’t revealed her personal experience with those politics, until now. In her new book, called Crossing the Line, Valdez shares her experience falling in love on an impromptu trip to Mexico. She also writes of how she and her husband made their cross-cultural, relationship work, even when he couldn't cross the border to be with her.

"I didn't speak much Spanish when I met Sixto, and he didn't speak much English. We spent the first year of our marriage carrying around a Spanish-English dictionary which we literally wore out that year," she said.

The personal story takes on the politics of immigration when Valdez shares that her husband came into the U.S. without a permit, and the process the two had to go through to get him permanent residence in this country.

"I wanted to tell a story, I didn't want to make it a political book or a preachy book, of course it follows the facts, but I tried very hard to make it easy to read and a book about people and emotions and relationships, she said it is a different process than writing other types of non-fiction books.

She writes of the first time her midwestern mother met her Mexican mother-in-law, and how they survived a natural disaster together. But most strikingly, she writes of how easy it was for she and her husband to become part of one anothers' families.

AZPM reporter Andrea Kelly spoke with Valdez about the book, which is a memoir of her marriage to Sixto Valdez, a man from rural Mexico, who moved to the U.S. to be with her.