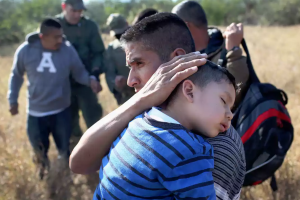 A record number of Central American families fleeing violence crossed the U.S.-Mexico border in the most recent fiscal year and total apprehensions were up, according to figures released by the U.S. government.

Almost 409,000 people were apprehended by U.S. Customs and Border Protection in the year ended Sept. 30, up 23 percent over fiscal 2015, according to figures released Monday. That's down from two years ago, when unaccompanied Central American children began pouring across the southern border in record numbers, stunning unprepared officials.

Still, the number of children accompanied by relatives crossing this year hit a record 78,000, up from just 15,000 in 2013 and just under 70,000 the following year. That's an indication that the administration's strict policy of raiding homes and deporting migrants, while also attempting increased levels of diplomacy in central America, is not entirely working.