CBP Must Value Life in Order to Improve Facilities 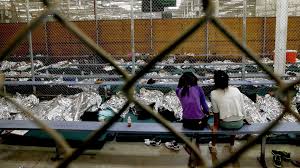 Recently, I, along with various members of non-governmental organizations (NGOs) from across the country and a handful of immigration attorneys were given tours of CBP’s Processing Center and Ursula, a short-term detention center where migrants are housed until they are sent to family members.

Although I wasn’t expecting a 5-star facility with quality amenities, I, along with my colleagues,  were in no way prepared for what we saw. Disgusting, deplorable and dehumanizing seem to be the most fitting adjectives to describe the conditions of these facilities.

Our first tour was of the processing center. After CBP field agents apprehend migrants, they are brought to this facility to “check-in”. The processing center is where information-gathering, interviewing and fingerprinting takes place. The facility is shaped like a horseshoe with 15 cinderblock built cells that all face the guards, who sit in the center of the horseshoe. The cells are no more than 15 feet wide and 35 feet deep.

Initially, I wanted to make direct eye-contact with those in the facility. I figured that by doing so, I would feel their pain, their sadness and that it would translate to fire and passion so that I could continue to fight for justice for them. My gazes didn’t last long as I begin to realize that these people had been “captured” and were now being caged. I felt guilt and shame. A crowd of dirt-stained faces, nutritionally deprived, and tired eyes stared through the plexiglass windows as we walked through.The number of people in cells varied and they were all grouped together by different demographics; age, sex and whether or not they traveled as a family.

The stench of days-old body odor danced through the air and the looks of desperation on the faces of the small children weighed heavily on our group while walking through the facility.

Although agents insisted that the cells are cleaned three times a day, members of our group were not buying that. The walls of the cells, I assume originally painted yellow, were covered in dirt and layers of old paint. The walls were brown. The concrete floors doubled as bedding for many of the small children. Those trying to catch up on sleep covered themselves with Mylar blankets,which look like giant sheets of aluminum foil. I was slightly perplexed as to why there were a few empty cells, especially when most of the cells were overcrowded.

The only running water was a toilet in the back with a half-wall that offered semi-privacy. Atop the toilet was a connected sink. While a few of the rooms had bottles of water, some cells had a sports cooler and limited cups. There were even a few cells that didn’t have any water supply other than the sink, which was less than a foot from the urinal.

Contrary to what CBP officials told NGOs, people have no privacy during their interviews with agents to discuss their background and travel information . Although they are supposed to be granted a one-on-one interview, there were at minimum two people sitting on one small bench while one person was being questioned by an agent on a computer screen. For many of the unaccompanied minors, one child was in an interview and on the floor surrounding them was 3-5 other children. For those who may have been coerced or forced to traffic drugs into this country a private interview is essential. These are people, human beings. Are they not entitled to have basic privacy rights?

Our second tour was of Ursula, the CBP detention facility. Our tour guide, who will remain unnamed, took great pride in this facility. He boasted about the size of the center and how it was built in 18 days. A couple of years ago, the Rio Grande Valley area saw an increase in people migrating. The facility was built quickly to handle this surge. Before the renovations, it was an old warehouse.

In this facility, children are able to shower and get a new pair of clothes and shoes. We did, however, notice that the shower area was 62 degrees Fahrenheit, which is entirely too cold.

Over the years, migrants have reported that these facilities usually have cold temperatures.Unfortunately, CBP has not remedied this issue.

While I appreciate the McAllen team for opening their doors to us, I still have a lot of concern about the treatment of migrants in these facilities. It’s clear that the “human-factor” is being taken out of the equation in these facilities. I’ve heard CBP officers refer to people in these facilities as illegal immigrants and illegal aliens, as though they aren’t worthy of simply being called human. The treatment of those in these facilities will only improve once this agency sees the value in life. Whether it is the life of a U.S. citizen, the life of an undocumented migrant, or the life of a refugee seeking asylum, it must be valued.
-- ChaKiara Tucker is the Communications Coordinator for The Southern Border Communities Coalition in San Diego, California. To contact her, please send emails to [email protected].