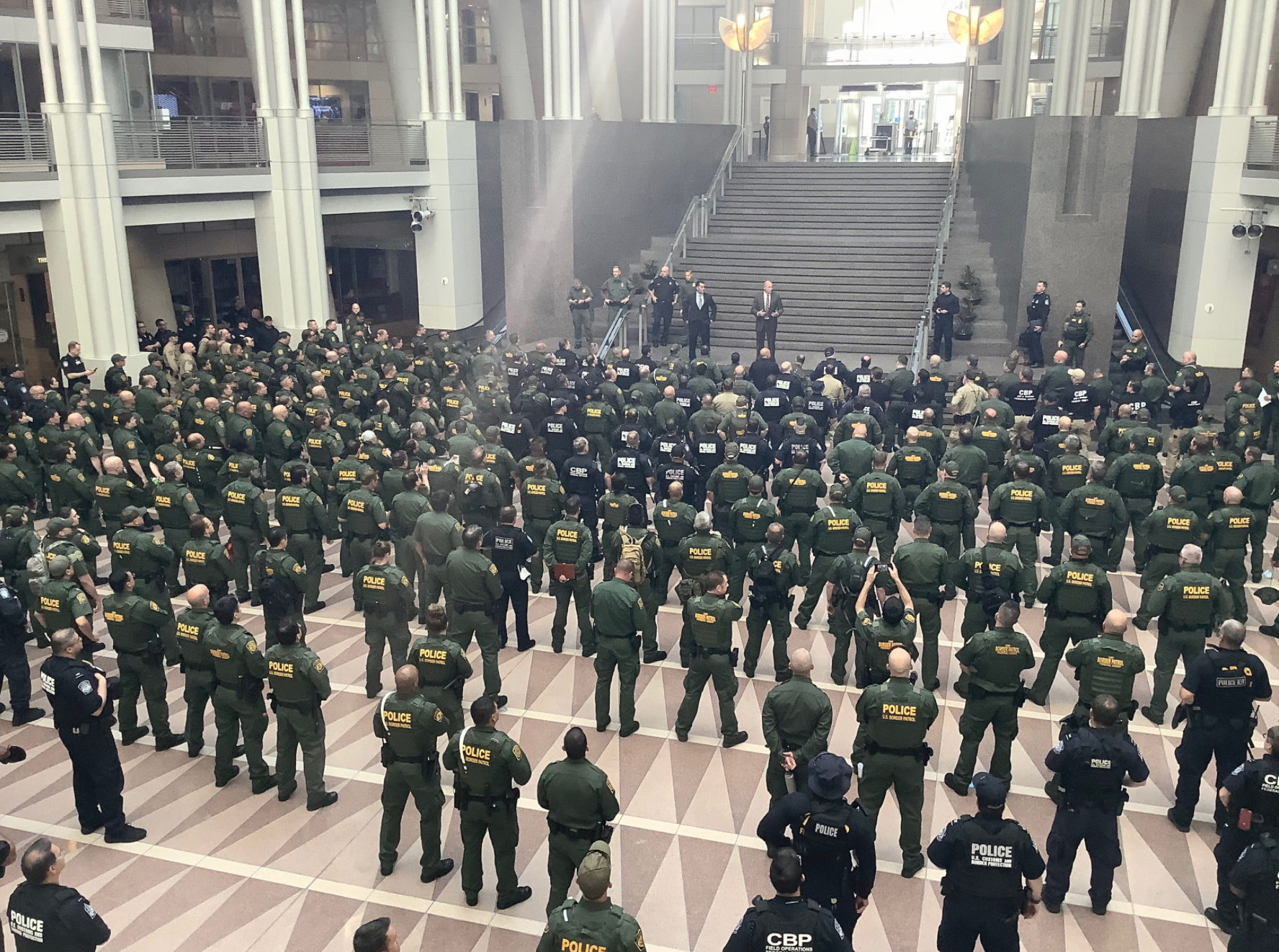 As communities across the country take to the streets to protest unjust policing practices, police brutality and the murder of George Floyd, Border Patrol agents are being deployed nationwide to clamp down on protesters.

The Border Patrol has long had aspirations on becoming a national police force, and with these deployments, they are a step closer to making those aspirations a reality. It started last week when the Border Patrol flew a predator drone over protesters in Minneapolis, while days later a bystander captured these terrifying images of border agents marching down Pennsylvania Avenue in Washington, D.C., en route to White House.

As shocking as it is, this isn’t an isolated deployment. In February, the Border Patrol deployed its elite tactical unit BORTAC to Sanctuary Cities as part of the Trump Administration’s continued persecution of immigrant communities.

Meanwhile, border patrol officials have been gloating on Twitter about their presence in places like Washington DC. Check out some of their tweets below, and what we have to say about it.

Like a dystopian Sci-Fi thriller come to life, CBP Acting Commissioner Mark Morgan posted this image of border agents standing at the ready at our nation's capital shortly before being deployed to patrol the streets to go after so-called terrorists. This blatant display of a militarized police force is what border residents see on a daily basis. Here, they incite fear in those exercising their first amendment rights, and create a tense environment for peaceful demonstrators.

CBP personnel have deployed to the National Capital Region to assist law enforcement partners. These “protests” have devolved into chaos & acts of domestic terrorism by groups of radicals & agitators. @CBP is answering the call and will work to keep DC safe. pic.twitter.com/QLueFkgaPO

Border Patrol Chief Rodney Scott retweets this pic from a CBP Twitter handle of a Border Patrol agent in front of what appears to be the Lincoln Memorial in Washington DC. CBP’s jurisdiction is within the 100-mile zone, a region around the perimeter of the country in which border agents assert the power to board public transportation or set up interior checkpoints and stop, interrogate and search children on their way to school, parents on their way to work, and families going to doctor’s appointments or the grocery store — all done without a warrant or reasonable suspicion. Many of the cities fall within that jurisdiction, including Washington DC, but some, like Minneapolis, MN and Atlanta, GA do not.

CBP respects and supports the right of the public to peacefully protest. We also have a duty to assist our law enforcement partners and to counteract those that wish to use this moment to incite chaos and violence. Our mission is to keep Americans safe. pic.twitter.com/246KUd4pCn

Here’s another disturbing shot of border patrol at our nation’s capital:

.@CBP personnel have deployed again tonight to the National Capital Region to assist law enforcement and prevent violence. It is my sincere hope that tonight’s protests remain peaceful and without incident. pic.twitter.com/HQV9S9plQ8

While protesters in Detroit took to the streets, CBP took to the air to surveil protesters. CBP has deployed flying spying machines made for war — like predator drones — and helicopters to cities like Buffalo, Chicago, DC, Detroit, El Paso, Miami & San Diego in an unprecedented escalation meant to position Border Patrol as a national police force.

.@CBPAMO is supporting our local law enforcement partners in Detroit by increasing their situational awareness on the ground. CBP is providing support on the ground and in the air as they attempt to regain control of their community. pic.twitter.com/sJBwFodm2h

Heavy border patrol presence outside of the border region can be seen in this tweet by Acting CBP Commissioner Mark Morgan. The presence of border patrol agents places everybody’s safety at risk. Remember, these are the folks that willingly separated children from their parents, who let children in their custody to die of dehydration and the flu, and who killed Anastasio Hernandez Rojas in 2010. Notice how their faces are blurred in the photos. This lack of accountability enables CBP’s culture of impunity and abuse.

Border Patrol Sectors are working with law enforcement partners across our nation to prevent further looting, rioting, arson, vandalism & destruction of property. As a federal law enforcement agency, it’s our duty & responsibility to respond when our partners request support. pic.twitter.com/LkrJLKks0J

Meanwhile in San Diego, Border Patrol agents in full-blown tactical gear with weapons (you know, that kind of stuff you use for war) pose for a picture among remnants of vigil on May 31, 2020. Posing with weapons and tactical gear after pepper balls and tear gas were shot at peaceful demonstrators earlier in the evening is a slap in the face of our civil liberties, and shows that these agents don’t care about the right to freedom of assembly. Border Patrol agents have killed more than 100 people since 2010 and none of them have ever been held accountable. To say that they support police accountability is to believe a wolf when it says it won’t eat its prey. 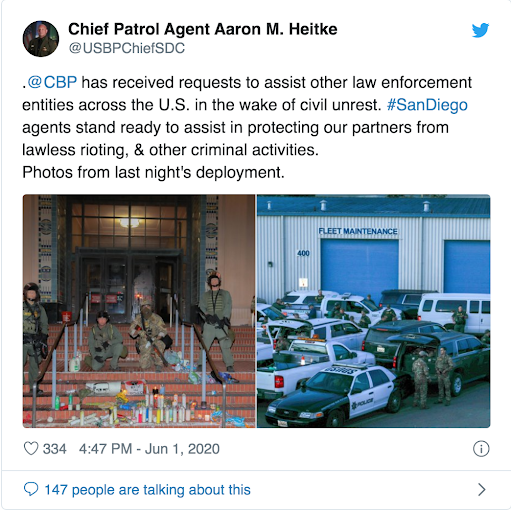 Enough is enough. We need to rein in CBP. We need a New Border Vision.