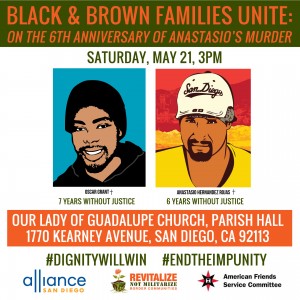 San Diego – To mark the 6th anniversary of Anastasio Hernandez Rojas’ death, his widow Maria Puga along with Jack Bryson, who is a member of the Oscar Grant Foundation, will participate in a community forum on Saturday, May 21 to discuss the struggles they’ve encountered with law enforcement abuse and impunity.  They will also discuss how Latino and African American communities can work together to strengthen their community organizing for accountability.

Anastasio and Oscar Grant were killed by law enforcement officers 6 and 7 years ago, respectively; yet to this day, there has been no justice or accountability in these cases. Just recently, the family of Anastasio Hernandez Rojas filed a petition before the Inter-American Commission on Human Rights to hold the United States Government responsible for his death, an unprecedented step in addressing extrajudicial killings along the U.S. – Mexico border region.

“We are tired of our family members and friends being murdered in the streets without justice. Both black and brown communities have been fighting police brutality for years. Now, we are strengthening our fight and our voices. Congress will hear us!”

“It is essential that black and brown people unite in our efforts to change a system that has been created to hold us down. We are number one in this country for police brutality and mass incarceration; however, we fall behind on education. There is a lot of work that needs to be done and it must start with our communities coming together. We share an array of hardships that should bring us closer together for our fight for justice. If we work together, we can be more effective at changing legislation.”

On May 28, 2010, Anastasio Hernández Rojas, a long-time San Diego resident, was brutally tortured and murdered by over a dozen Customs and Border Protection agents near the San Ysidro Port of Entry. Almost 6 years have passed since his murder and not one officer has been prosecuted for his death. Border Patrol is the country’s largest law enforcement agency and it operates with impunity.

On January 1, 2009, Oscar Grant, an unarmed teen, was handcuffed and fatally shot in the back by BART Police officer Johannes Mehserle at the Fruitvale Bart Station in Oakland, CA. Mehserle only served 11 months in prison for Oscar’s murder.