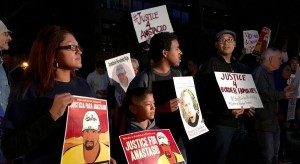 Immigration activists in San Diego are continuing a national push for the implementation of body-worn cameras for agents and officers of U.S. Customs and Border Protection.

Advocates with the Southern Border Communities Coalition recently traveled to Washington, D.C., to meet with members of Congress and officials with the Department of Homeland Security to discuss the matter.

The meeting comes weeks after President Barack Obama allotted $5 million in the 2017 budget for Customs and Border Protection to move forward with camera technology, including use of body-worn cameras.

It’s been unclear for several months, however, whether immigration officials will opt to equip border agents with cameras, as they continue to study their effectiveness in test sites.

“Our efforts here (in Washington) are to let CBP and DHS officials know that the public has been asking for transparency for a long time,” said Christian Ramirez, director of the Southern Border Communities Coalition.

CBP’s D.C. office did not respond to requests for comment. The agency in November deferred a decision to require body-worn cameras for agents and officers, saying officials needed more time to address significant technical, environmental and labor changes.

Body cameras have since been deployed at training facilities as the review continues.

In addition to body-worn cameras, the activists are calling for greater accountability and reform within the country’s largest law enforcement agency.

CBP has come under criticism in recent years amid allegations of excessive force and a lack of public information on the findings of such cases.

One case that gained national attention involved Anastasio Hernandez Rojas, a San Diego man beaten and tasered during a confrontation with Border Patrol agents in 2010. Hernandez Rojas died three days after being apprehended at the San Ysidro Port of Entry allegedly for attempting to cross the border illegally.

The Justice Department’s decision not to bring charges against border agents sparked outrage among the Mexican man's family and local immigrant rights groups who argue that agents used excessive and unwarranted force against Hernandez Rojas, who was in handcuffs during part of the altercation.

Border Patrol agents and officers involved have said Hernandez Rojas was combative and that it was necessary to subdue him, according to court documents. The San Diego County Medical Examiner's Office ruled his death a homicide but said drugs and a heart condition were contributing factors.

“We want to make sure that CBP lets the public know what happened in those cases; whether they were within CBP policy or whether any agents were disciplined,” Ramirez said.

Terence Shigg, president of the National Border Patrol Council’s local chapter, said the agents’ union supports the decision to implement body cameras, so long as officials establish a clear policy on how and when the cameras should be used.

Shigg said the policy should include specific details on when the cameras should be turned on, how significant amounts of data or camera footage will be stored and how officials will protect the privacy of individuals shown in the footage.

Shigg also said border agents should be given the opportunity to review any footage in order to give well-informed statements about particular incidents and to corroborate details such as license plate numbers or suspect and vehicle descriptions.

“There are lots of questions out there that I think need to be addressed from a bargaining side, from the safety side and from the public’s side,” he said. “Our typical area of operation is different than that of the patrol beat of a city cop.”