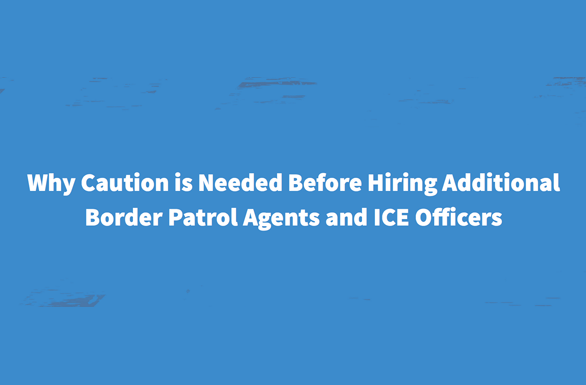 The last time the Border Patrol received a large infusion of money to hire thousands of new agents, cases of corruption and misconduct spiked in the agency. New hires were not sufficiently vetted, novice agents were not adequately supervised, and agents who abused their authority acted with impunity.

Trump administration wants to repeat history by hiring thousands of additional Border Patrol agents, as well as Immigration and Customs Enforcement (ICE) officers, without introducing the reforms and safeguards needed to avoid the abuses and scandals of the past. Corruption is likely to ensue from such a rapid acceleration in hiring, problems which could easily be averted with rigorous hiring practices.

The administration’s plans are encapsulated in two memos issued on February 20, 2017, by Secretary of Homeland Security John Kelly. The memos implement President Trump’s executive orders on border security and immigration enforcement and call for hiring 5,000 additional Border Patrol agents  within Customs and Border Protection (CBP) and 10,000 additional ICE officers—ostensibly as a means of enhancing public safety and national security.  But these two branches of the Department of Homeland Security (DHS) are poorly prepared to recruit, train, and supervise new personnel. While the Border Patrol experienced some improvements in the aftermath of its last expansion, most recommendations for reform remain unimplemented.

Given this history, there are serious concerns that rapid expansion will bring about a resurgence of problems in the Border Patrol and also cause similar problems in ICE. The proposed surge is also stunningly expensive. Yet there is little justification for this expense at a time when undocumented immigration has fallen to historic lows. If the goal is to enhance border security, this money would be better used in many other ways.