What I learned reporting on both sides of the U.S.-Mexico border 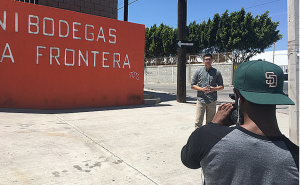 Editor’s Note: Recently, a group of Cronkite News reporters traveled along the U.S.-Mexico border to work on stories about the results of a Cronkite News-Univision News-Dallas Morning News border poll. Mauricio Casillas, a recent graduate of the Cronkite School of Journalism at Arizona State University, was one of the reporters who contributed to our coverage. Here, he reflects on his experience as a Borderlands reporter.

Reporting on the border is unlike any other reporting I had ever done. The people, the culture, the issues — they are all unique. For instance, issues that people on the El Paso/Ciudad Juarez border face are not the same as those on the San Diego/Tijuana border. That’s why I think this kind of reporting is so important. Too often, we as journalists like to paint the entire border region with the same brush.

Yes, these are all border communities. Yes, there are similarities. But when you really go out and meet people and do the reporting, you realize how unique these areas truly are. What I found in my reporting is that border residents on both sides often don’t feel accurately represented by their own governments. Politicians in Washington and in Mexico City are arguing about border issues — but residents feel they are not understood. Mexico’s influence on the United States, and vice versa, cannot be understated.