What A Reporter Learned When He Infiltrated An Arizona Militia Group 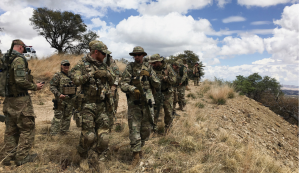 Heard on All Things Considered

Along the border between the U.S. and Mexico, armed groups on patrol — mostly men — look for illegal immigrants and drug traffickers. They're not U.S. Border Patrol, but regular people who've decided to take matters into their own hands.

They call themselves militias. Groups such as these have been around for decades, but they exploded in number after Barack Obama was elected president. Today, there are276 militia groups around the country, according to the Southern Poverty Law Center.

Shane Bauer, a reporter with Mother Jones magazine, went undercover with one of those groups — the Three Percent United Patriots — on one of their operations in southern Arizona.

"They didn't know that I was a journalist," Bauer tells NPR's Kelly McEvers. "I didn't lie to them, but I was just there as another militia member, so they're all being very frank around me."