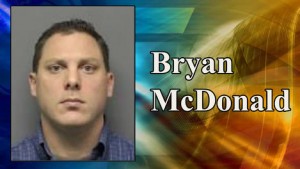 The Border Patrol agent accused of attacking a Massena couple who stopped to help his wife after a fatal accident pleaded not guilty to felony assault charges.

Thirty-five year old Bryan McDonald entered the pleas at his arraignment in St. Lawrence County Court Monday morning. He was indicted on the charges earlier this month.

His wife, 33 year old Ashley McDonald, was hit by a car and killed on County Route 37 near Massena in December. She was pronounced dead at the scene.