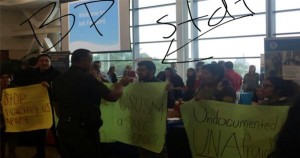 Sociology professor Marisol Clark-Ibáñez tweeted a photo Thursday evening showing students holding signs with messages such as “Stop tearing us apart” and “CSUSM: A Safe Space?” in front of the table advertising positions with U.S. Customs and Border Protection (CBP), while a uniformed officer records them on a cell phone.

The next day, she sent an open letter to Career Center Director Pamela Wells explaining that, as faculty advisor to the Standing Together As oNe Dream(STAND) student group, she became alarmed upon arriving on campus Thursday morning to find a CBP vehicle and three police cars (all empty) parked near the student union.