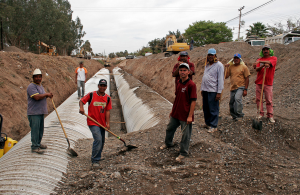 “You got what you wanted! But you lost what you had!”

Friends on the Other Side,

“The Princess and the Frog”

With the jobless rate well below 5 percent, employers are quick to gripe about difficulties finding qualified workers. Yet immigration from Mexico is in decline and unlikely to reverse course.

The U.S. economy has long relied on labor flows from Mexico. Mexican workers mostly came illegally because the immigration system reserves most legal avenues for family members of U.S. citizens. Outside of agriculture, just one seasonal worker program exists for low-skilled Mexican workers, but is capped by fixed

The “NAFTA” visa is only for high-skilled workers, and just 10,000 such visas are issued annually.

Border Patrol apprehensions of Mexican border- crossers are down almost 90 percent from their peak in 2000. At fewer than 200,000 apprehensions in fiscal 2015, the Border Patrol intercepts about as many migrants as it did in the early 1970s, before the era of mass immigration.

Recent immigrants from China outnumbered those from Mexico in 2013, as did new arrivals from India.

Mexico-U.S. immigration always has been about workers. The first big push came in the early 1900s, when U.S. recruiters reached deep into Mexico to persuade reluctant workers to labor on railroads and ranches. After Congress restricted European immigration in 1921 and 1924, Mexican workers filled the void. The Mexican immigrant population surged 29 percent between 1920 and 1930.