U.S. to be Held Accountable for Murder of Anastasio Hernandez Rojas 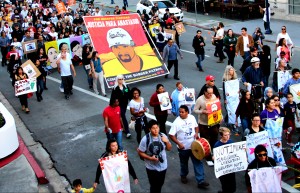 Washington D.C. -  Today, the family of Anastasio Hernández Rojas will take an unprecedented step towards justice. The Hernández Rojas family, along with international law experts from the University of California, Berkeley International Human Rights Law Clinic and advocates with the Southern Border Communities Coalition will file a petition with the Inter-American Commission on Human Rights in Washington D.C. The petition follows six years of stalled investigations and failure to hold U.S. Customs and Border Protection agents accountable for killing Anastasio.

There will be 2 media opportunities taking place today:

*Note - The telephonic briefing has been canceled.

To arrange interviews with members of the Berkeley Legal Team and/or Anastasio's family, please contact ChaKiara Tucker at [email protected] or 813-420-2836.

Delegates traveling to DC include:

“The case of Anastasio is incredibly significant because it pierced the credibility shield of CBP, who for nearly a century has operated with near total impunity. The video in that case was the first to expose the lies told by CBP. The agency asked us to believe them when they told us that the use of force that ended Anastasio’s life was necessary to subdue an out-of-control Anastasio. But the video shows us the truth: it shows us out-of-control agents who are torturing, electrocuting, and beating a man who is hogtied and face down on the ground. This video was the tip of the spear that cracked open CBP, leading to agency-wide investigations, a new use-of-force policy, leadership transitions, and the testing of body-worn cameras.“

“Our collaboration with the clinic is a game changer. The legal expertise and energy of Professor Altholz and her students has given us, community advocates, and Anastasio’s family a second wind. We have exhausted our options in the US court system. With the clinic’s help we can take this fight for justice to the international arena. This time, we are not bringing a demand against specific agents, but rather against the US government for its systemic failure to deliver justice to border victims.“

“On behalf of my entire family, I am very grateful for the work of the clinic. With their help, we have new hope that one day we will get justice for Anastasio and that we will keep another family from suffering as we have.”

In 2010, over a dozen CBP officers brutally beat, Anastasio, a longtime San Diego resident and father of five, then shot him with a Taser and killed him. The medical examiner deemed the case a homicide. Despite eyewitness video evidence that captured the horrific scene, the Department of Justice, citing a lack of evidence, failed to prosecute the agents involved in this heinous incident.

The petition filing comes on the heels of several scathing reports that point to serious internal problems inside CBP, the nation's largest police agency, that fuels a culture of violence and impunity that has allowed CBP officers to kill at least 46 civilians since 2010, many of them unarmed, without consequence. With the exception of one case, CBP agents have not publicly faced disciplinary actions from the agency.

The newly formed CBP Use of Force Review Board is allegedly conducting an administrative review of the incident almost 6 years after Anastasio was tortured and killed, but there is no known outcome of that review.

Anastasio's family is determined to hold the U.S. government accountable for failing to deliver justice.

On May 28, 2010, border agents at the San Ysidro Port of Entry brutally beat, discharged a Taser multiple times and subsequently killed Anastasio Hernandez Rojas, a longtime resident of San Diego. An eyewitness recorded the incident and the video became international news, calling into question the brutality of CBP, which has long been alleged to abuse residents of southern border communities.

The video captured the scene of over a dozen officers surrounding Anastasio who was handcuffed and hogtied face-down on the ground while he suffered this abuse. The Medical Examiner's Office ruled Anastasio's death a homicide and experts have described the incident as torture.

Border agents were unsuccessful in their attempts to confiscate and destroy all video footage taken by witnesses. Two years after Anastasio's murder, footage was released and aired nationally on PBS' Need to Know.

After the show aired, the Southern Border Communities Coalition (SBCC) traveled with Anastasio's family to Washington, D.C. to meet with members of Congress and ask for their help in pursuing justice not only for Anastasio's death, but for the killings of many other border residents and migrants. As a result of this advocacy, 16 members of Congress sent letters to the Department of Homeland Security, the Inspector General and the Department of Justice expressing concern over Anastasio Hernández Rojas' death, which prompted investigations and condemning reports that highlighted a culture of impunity within CBP.

In 2015 the Department of Justice announced they would not prosecute the federal agents involved in Anastasio's death.