Trump’s Border Wall Could Be Invisible: Pathfinder could be the future of surveillance at the southern border. 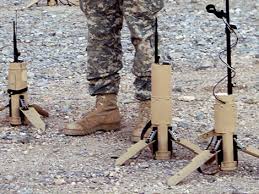 A soldier in Afghanistan kneels down, maybe to tie his shoe or set his gear on the ground for a moment. A minute later, he stands up and keeps walking. To the casual observer, nothing out of the ordinary just happened, but a closer look reveals that he just buried a coffee mug-size sensor in the dirt, one of several he will sink on this patrol.

The device, called an expendable unattended ground sensor (E-UGS), will automatically alert a workstation or mobile phone when a human walks within 30 meters of it. The UGS can act as an invisible trip wire, or a surreptitious doorbell, and can be linked to trigger cameras, drones, or remote-controlled weapons. The target would never know how he or she was discovered. It sounds like advanced combat, but in a few months, the person burying that sensor might not be a soldier, but a U.S. border patrol agent working on President-elect Donald Trump’s wall.