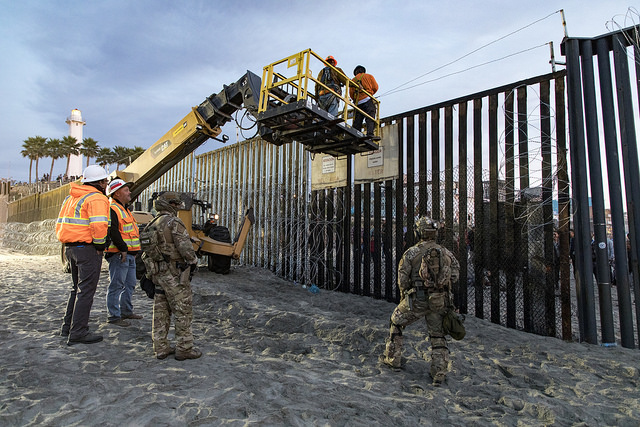 SAN DIEGO, CA --  Yesterday, on one of the busiest travel weekends of the year, the Trump administration closed the San Ysidro Port of Entry as border agents fired tear gas and rubber bullets at men, women and children seeking asylum at the busiest border crossing in the world.

It was the latest escalation by the Trump administration in its efforts to create chaos and confusion at the southern border in order to justify the construction of his border wall. Congress has until Dec. 7 to fund the Department of Homeland Security for Fiscal Year 2019, and Trump wants to include billions for his vanity wall.

Vicki B. Gaubeca, director of the Southern Border Communities Coalition said the following:

“Trump remains obsessed on doing whatever he can to get his dumb and dangerous wall, which only serves his political goals, not the hopes and needs of the southern border community. The southern border is one of the safest places in the nation, and yet Trump continues to spin a false premise that we are at war with our southern neighbors, and that we need to shoot rubber bullets and tear gas canisters at families who are only seeking to protect their children. This hate-fueled narrative is not only harmful and violent, but morally reprehensible. We need a hemispheric humanitarian response to address the spiralling violence and poverty that is driving people to leave their homes, not further militarization of the border.”

“The southern border is a key engine of economic growth; an international trade hub that  creates jobs and generates wealth on both sides of the border. Closing the busiest port of entry, even if it was for a few hours, is fiscally irresponsible and dangerous to the economic well-being of our region’s --and our country’s-- economic well-being. We estimate that because of the closure, businesses in San Ysidro lost more than than $5 million. Mexico is the United State’s third-largest trading partner, if Trump follows through on his threat to shut down the southern border again, it would economically ravage our region and our country.”

"I've represented the U.S.-Mexico border for the last eight years. Many of us have dedicated ourselves to create a unique place of encounter, not confrontation. Like most San Diegans, I know of the importance of our shared border economy. It is as integrated into the fabric of our border community as many families are. This region has worked to find solutions to our common problems before, and that is why I remain committed to fulfilling our infinite potential in the San Diego-Tijuana region, instead of promoting politics of hate and division."

“It is unconscionable that Border Patrol would violently repress migrants who have expressed a desire to petition for asylum in the United States. Shooting men, women, and children with tear gas is reprehensible behavior. Instead of endangering our communities with more militarization, US authorities should concentrate their resources on expediting asylum requests and honoring the basic human rights protections that all vulnerable populations merit and which U.S. authorities are obligated by law to uphold.”