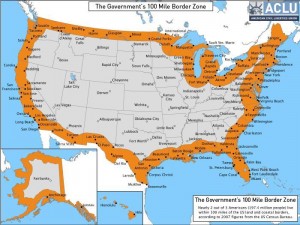 Recently Maria Abi-Habib, a journalist at the Wall Street Journal, had a troubling experience. As she detailed on Facebook (picked up by Motherboard), customs agents at Los Angeles airport tried to take her phones after grilling her for an hour—something she protested as a violation of her rights. But it went further than that. "My rights as a journalist or U.S. citizen do not apply at the border," she wrote, "since legislation was passed in 2013 giving DHS very broad powers."

This is true, but the meaning of "border", a concept that one normally assumes is a hard line, has been shifting for much longer than that. In particular, a technical definition in federal regulations established in 1953 has resulted in 100-mile “border zones,” sometimes encompassing entire states, and some groups becoming increasingly alarmed by the implications of such wide-ranging border areas.

In 1952, the government authorized the United States Border Patrol (initially established in 1924) to patrol “all territory within 25 miles of a land border” and board and search vehicles for illegal aliens,according to the website of its successor agency, the U.S. Customs and Border Patrol (CBP). Immigration officers—then and now—receive their authority from Title 8 of the Code of Federal Regulations. Currently, section 287 of Title 8 of the Code of Federal Regulations authorizes immigration officers to search and interrogate, without warrant, any person suspected of being in the United States illegally within a “reasonable distance” of any external boundary of the United States. In 1953, the Department of Justice amended section 287.1 of 8 CFR to define “reasonable distance” as 100 miles, a distance the American Civil Liberties Union insinuates was arbitrarily determined.