SPECIAL: Valley prepares for next wave of Central American children 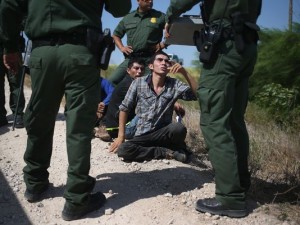 The rust-brown fence topping the northern levee of the Rio Grande in Hidalgo County is the dividing line between two worlds, which many are willing to risk their lives to cross.

"So the stories are always going to be the same, right?" explained Omar Zamora, public affairs officer for the U.S. Border Patrol Rio Grande Valley Sector. "The pull factors, it's going to be family reunification and some sort of economic benefit, just trying to get here to get a job and send money back home. In addition to that, we hear that there's violence. We've got gangs over there that are controlling the neighborhoods, controlling the cities."

It's a mix that reached a crisis in 2014. Some 260,000 people, mostly unaccompanied children from Central America, flooded across the border through the Rio Grande Valley. Congress called for legislation, then-Gov. Rick Perry mobilized a thousand National Guard troops, and the Eighty-fourth Texas Legislature pumped nearly a billion dollars into the Texas Department of Public Safety for border security.

That was more than a year and a half ago, and with everything that's happened, the question is what -- if anything -- has changed?

"Much has changed. Our processes have changed and improved," said Zamora. Agents of the RGV Sector man the front lines of the battle against drug trafficking and human smuggling. A massive new processing center in McAllen stands ready to hold up to a thousand people. A rare tour found it spotlessly clean and stocked with blankets and clothing -- and as it happens, it may soon be needed.

"In the past few months the number of unaccompanied alien minors unlawfully entering the U.S. soared to over 17,000 and the number of family units increased to 21,000," Chair Rep. Trey Gowdy (R-SC) informed the U.S. House Judiciary Subcommittee on Immigration and Border Security in a February 4 hearing on Capitol Hill. "If these trends continue it is predicted there will be a 30 percent increase in the record high numbers we witnessed in 2014."

"They're still coming, not in the same numbers," Hidalgo County Judge Ramon Garcia told KVUE in January. "I guess you could call it a mini-surge from Central America."

Like many in the valley, Garcia argues the military presence is scaring off business, despite F.B.I. crime statistics that show McAllen with one of the lowest crime rates for a large U.S. city. Unlike law enforcement, Garcia believes the troops and military hardware, "Just creates a bad image, a negative image of our area which we don't appreciate."

He argues funding would be better spent on local law enforcement, and a better solution would be more judges and legal resources to quickly sort out who can stay and who must go.

"They're saying, 'Here we are.' So you can add a thousand more folks there, but they're not trying to evade you," Rep. Henry Cuellar (D-TX), whose district includes part of the valley, told KVUE on a January stop in Austin. Cuellar carried a bipartisan bill in 2014 that would have expedited cases from Central America.

While that bill never passed, "We also added about $750 million to help Central America beef up its security, fight the drug gangs, provide some economic assistance," said Cuellar, "Because the more people we get to stay over there, the less people come in."

Another $80 million has gone to help Mexico secure its southern border with Guatemala, where along with Honduras, the U.S. government has mounted an ad campaign warning what to expect from human traffickers. Zamora can tick over a list of abuses, "From child molestation to raping some of these Central American women, holding them for extortion for extra money, or leaving them out in the brush to die."

An official from the Guatemalan Consulate told KVUE that migrants are well aware of the risk, but are often faced with violence so desperate in their home country that they are willing to chance the journey. Rep. Lamar Smith (R-TX) chairs the House Border Security Caucus, which toured the Valley in February.

"If people figure they have a 95 percent chance of being allowed to stay and work and get government benefits, they're going to come no matter what they might hear on the street or on the radio or see in a leaflet," said Smith.

In a February 23 hearing of the Senate Judiciary Committee Sen. John Cornyn (R-TX) asked agency Acting Chief Ronald Vitiello whether giving undocumented immigrants the impression they won't be allowed to stay in the U.S. without a legal claim would act as a deterrent and slow the flow of unauthorized crossings.

Meanwhile, agents on the front line are battling an additional fight, against what they believe are perceptions that they're the aggressors. Joining agents for a day of hands-on training in January revealed an organization keenly aware of the humanity and the dangers they face. Many are from the area, and feel a personal compassion towards the victims of trafficking. They're also well-aware that the next call could bring the face-to-face with dangerous cartels.

"I think the biggest misconceptions are, 'Hey they're just children down there, right? It's a humanitarian crisis,' which it was in 2014," said Zamora, "But what I want to stress is there's the fifty percent of the other individuals that are running, that are fighting, that have criminal records. We're out here doing a fantastic job 365 days out of the year, 24 hours a day, seven days a week."