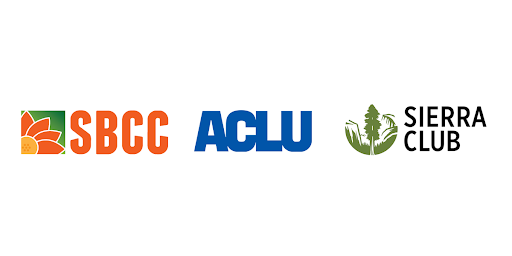 The lawsuit alleges that the president, once again, acted beyond his authority and unlawfully used his limited emergency powers to bypass Congress to fund his border vanity wall. The Constitution gives Congress alone the “power of the purse” and Congress used it last week to deny Trump the full funding for his dangerous and deadly wall.

Trump’s attempt to spend money by fiat, rather than by law, is not only another demonstration of his reckless disregard for our Constitution, it has real consequences for border communities. This is not a kingdom, this is a democracy, and the president has yet to act as a responsible member of that democracy.

SBCC steering committee members had this to say about why we have brought the lawsuit to oppose the ever increasing militarization of our border communities:

"In the Rio Grande Valley sector in Texas, we suffer from existing walls and barriers and do not need or want more. The government has taken family lands and erected walls in backyards, without consideration for the people who live there. It has built billion-dollar barriers through communities that don’t even have sidewalks, street lights, or running water. In addition, the walls here exacerbate flooding by channeling the Rio Grande River into our neighborhoods and trap the water in a delta that is chronically hit with hurricanes, endangering our lives.

Ignoring all the harm that has come before, the president wants to build more walls that will do even more harm, including in wildlife corridors that are part of our natural heritage and an important  ecotourism sector on which our region relies. Birding, in particular, is a significant source of revenue for the region, and a wall built above the height that low-flying birds can fly or that cuts waterfowl off from mating or nesting areas will have devastating consequences.

"In the El Paso sector, which includes all of New Mexico, we have seen and felt the brunt of border militarization first-hand. Trump’s wall will do nothing to protect our diverse and vibrant region, it will only degrade the quality of life of the 15 million people who call the southern border region home. Trump’s hateful and divisive policies in the quest for his deadly vanity wall will destroy our borderlands, endangering our wildlife and our pristine, biologically diverse environment. These policies will fragment and divide the binational character of our region, and heighten racial division by promoting hostility towards immigrants and communities of color in border communities.

"In the Tucson and Yuma sectors in Arizona, walls are a component of our immoral border policy to use mountains and deserts as lethal deterrents to migration. They have driven people to their deaths as they try to go under, over, and around them because the government has failed to provide a line for migrants and asylum seekers to stand in. Instead, the government is turning back families in need of protection and failing to fix a broken immigration system. As a result, several hundred people die a year, pushed to their deaths by our walls. In the last year alone, more than 400 people -- women, children, and men -- have perished or disappeared attempting to cross the U.S.-Mexico border.

The border wall is a wall of tears -- the tears of the loved ones who have lost their family members, thousands of them, to a policy of deterrence that ignores the human condition and the need to seek safety. Migration is as old as time and a wall does nothing to stem the flow of people pushed by danger. We need humane policies that recognize this fact, not walls that ignore it.

“In the San Diego sector in California, apprehensions of unlawful migrants are at historic lows, asylum seekers are presenting themselves to border agents with their cases as they have done for decades, and the sister cities of Tijuana and San Diego live bound in a symbiotic relationship of culture and trade. This is our normal -- there is nothing crisis about it except for the crisis brought on by the president in continuous attempts to hyper militarize our communities and ignore human rights to advance a hateful and racist political agenda.

Trump’s abuse of power threatens to erode our democracy. There is no security crisis at our southern border, but there is constitutional crisis emerging in the White House. If the president is allowed to abuse his power to marshal military resources to build a wall that harms our communities and our environment, and bypass Congress to do it, this country will move one step closer to an authoritarian government. Absolute power corrupts absolutely, and we must not let that happen. We must hold this president accountable.”