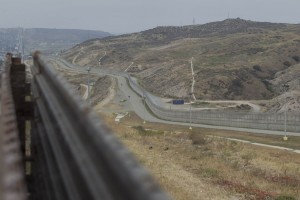 This patch of American soil near Tijuana's Colonia Libertad was most famous illegal crossing spot on U.S.-Mexico border

Jose Arias Martinez is 83 and has lived in Tijuana’s Colonia Libertad neighborhood for 40 years. He remembers when a patch of American soil a few hundred yards from his house was the busiest and most famous spot on the U.S.-Mexico border for illegal crossings.

Every day, hundreds of migrants who were heading north for work gathered at dusk and waited for darkness before moving through the brush and up the canyons, into San Diego and points beyond.

So many people used it as a staging ground that a marketplace emerged: Vendors in tarp-covered stalls sold food, clothes, shoes — even shots of tequila, said to be good for courage because the journey was risky. Bandits were in the nearby hills. Border Patrol agents were on the canyon rims.

Nobody waits at the dirt field any more. Ask Arias why and he nods at the rust-colored 10-foot-tall metal wall that sits a few paces from his front door.

At first glance, what happened here may seem to some like it belongs in a Donald Trump campaign speech about the need for a border wall. Hordes of people breaking the law, swarming into America under cover of night, overrunning the Border Patrol. Then a fence goes up, and it stops.

But the border is not a soundbite, and the complete story is far more complicated. The wall has had dire consequences elsewhere.

It’s pushed migrants east, into the treacherous desert and mountains. By some estimates, more than 5,000 people have died trying to cross there, a doubling of the fatality rate.

It’s separated families who might have stayed together across a more porous border, turned what some characterized as a temporary, circulating labor supply in the U.S. into a more fixed population of underground residents.

And it’s used tax dollars that might have gone to other things — health care, transportation, schools.

So whether you think what happened in this one small slice of the border is beneficial probably depends a lot on how you digest the complex, swirling, super-hot stew that is American immigration policy and practice.

This is a place that has always meant different things to different people.

On the American side, it’s known as “the soccer field,” because that’s the game adults and children once played there.

On the Mexican side, it’s Cañón Zapata, after a nearby canyon, although some refer to it as “La Canela,” for the cinnamon-spiced drink that was sold there.

In April 1985, migrants passed a metal sign at the U.S.-Mexico border pointing the way to Los Angeles. Union-Tribune file photo

By the mid-1980s, an estimated 50 percent of all migration from Mexico into the United States was coming through the city limits of Tijuana, and about 80 percent of that was going to the soccer field, according to research by Jorge Bustamante, former president of El Colegio de la Frontera Norte and a sociology professor at Notre Dame.

For several years, Bustamante had photographers overlooking the field take three pictures every night: one an hour before sunset, one 10 minutes before sunset, and the last an hour after sunset. He said the project helped document both the size and cyclical nature of the migration.

“People were arriving in Tijuana and asking where they should go to cross and people were sending them to Canyon Zapata,” he said. “It was a regular stop on the public bus system.”

Back then, agents mostly stayed on the canyon rims. “We didn’t have the manpower to do any enforcement down there,” said Gonzalo Perez, a 30-year Border Patrol veteran. “There were so many people staging, it was like a no man’s land. If we went down there, we would have to go with everybody we had. So we observed them as they went north and tried to deploy accordingly.”

The migrants who escaped getting caught — and more than half did, according to estimates — often ran into robbers. Thieves liked the brushy canyons, too. Men were shot and sometimes killed, women were raped. It was considered foolish to try the trek alone, so most hired guides known as coyotes.

Sometimes the coyotes and the robbers turned out to be the same people.

San Diego police and the Border Patrol formed an undercover joint task force designed to stop the crime, a unit made famous by Joseph Wambaugh in his book “Lines and Shadows.” In the first 21 months, more than a dozen encounters with would-be bandits erupted in gunfire, killing two suspects, wounding 10 others, and leaving three officers injured.

Some lauded task force members as heroes, others saw them as renegades, and the controversy added to a growing sense of alarm about what was happening at the field from both those who wanted the border closed and those who wanted it open.

With the U.S. going through one of its periodic cycles of agitation about illegal immigration in the 1980s, the busy San Diego-Tijuana corridor — and the soccer field in particular — became a magnet to politicians and the media.

The press conferences held there, and the stories published and broadcast, helped shape the national debate.

One nationally syndicated columnist came to see the nightly gathering of migrants and wrote about “the disquieting sight of my own country’s border, effectively out of control.” A mayor from Utah asked, “What is it going to take to stop it?”

Others came away anguished by the poverty and desperation of the migrants. “To think they would walk so far,” a mayor from Sacramento told reporters, “things must be miserable.”

The area known as the soccer field in July 1986. Union-Tribune file photo

In San Diego, The Tribune’s Jonathan Freedman won a Pulitzer Prize for immigration-reform editorials that backed amnesty for undocumented workers and called for sanctions against employers who exploited the labor. The editorials relied in part on reporting from the soccer field.

“Screams arose from the canyon,” Freedman wrote about his experience there one night. “A feeling of powerlessness haunted me.”

In November 1986, President Ronald Reagan signed into law the Immigration Reform and Control Act, which included amnesty for about 2.7 million people who had been in the country since 1982, employer sanctions, and beefed-up border enforcement.

Publicly, government officials claimed the program was working, citing a drop in apprehensions along the San Diego-Tijuana border. But Bustamante, the sociology professor, saw something different in the thrice-daily photos taken at Canyon Zapata.

“It’s as if nothing has happened,” he told a reporter in 1988. “So far there is no significant impact.”

Most experts now agree that the law didn’t do what was intended. The number of unauthorized immigrants in the country has grown from about 5 million when the law passed to more than 11 million today.

Its failures, many believe, were because it did nothing to address the socioeconomic pressures that drive migrants north. The employer sanctions were watered down. And Congress didn’t provide enough funding for increased enforcement on the border.

The money started flowing in the early 1990s, accelerated in 1994 with Operation Gatekeeper, and mushroomed after 9/11 in 2001. The number of Border Patrol agents here more than doubled. Millions of dollars were spent on floodlights, surveillance cameras, ground sensors and helicopters.

And, of course, on a border wall. Outside Colonia Libertad, it’s two walls.

According to the Border Patrol, the number of people stopped for attempting to cross illegally into the San Diego area dropped from 628,000 in 1986 to 26,290 last year. Agent James Nielsen said apprehensions have stayed steady at about 30,000 for the past five years.

Arias, the longtime Colonia Libertad resident, has noticed the change. Where there used to be dozens at a time coming by his house, now there are maybe one or two, he said. And they don’t come every day.

Looking west from the area known as the “soccer field.” — John Gibbins

That doesn’t mean those who want to smuggle humans or drugs across the border have stopped trying. Most of the activity has moved east, into the mountains and deserts of California and Arizona, a shift that has seen hundreds of migrants die every year from dehydration and exposure.

Some still attempt to cross near the soccer field, too. No longer able to gather freely out in the open, they use spotters with binoculars in empty hillside houses who signal when it is safe to breach the fences.

Now, instead of climbing over it, they cut through it, or try to. And then welding crews patch the holes. It’s a different kind of cat and mouse game.

Out of frustration or as a distraction, smugglers have pelted agents with rocks, some of them wrapped in gasoline-soaked rags and set on fire, according to the Border Patrol. About eight years ago, someone strung a thick wire between the two fences and pulled it taut, where agents said it could have decapitated one of them riding by on an ATV.

Agents sometimes responded to the “rockings” with pepper spray and, in one episode that left 11 people in Tijuana requiring medical attention, with tear gas.

One of the canisters landed near Arias’ front door. “The whole canyon filled with smoke,” he said. He coughed for a year.

Jose Arias, 83, looks at the religious shrine that he built against the border fence. — John Gibbins

On a recent weekday morning, he shook his head at the memory. He seemed tired of the whole thing. But he also has other things on his mind, and on his heart. His wife of 58 years, Maria Esther Medina Castillo, died last month. Three months earlier, one of his sons died.

Both are memorialized with photos, candles and flowers in a religious shrine built across the road from his house, right up against the first border wall. The shrine is sturdy, made out of solid concrete, he said as he patted one of its sides with his hand.

But more change is coming. The Mexican international highway planned from the Tijuana airport to the ocean will run through his property. Clearing has already begun. His house will be torn down. And so will the shrine, which he hopes to rebuild, farther up the hill, away from the border.