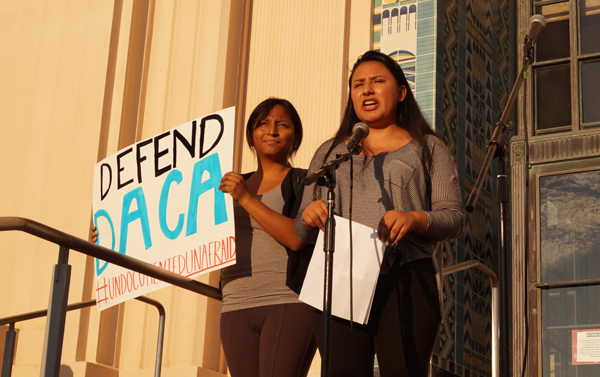 SOUTHERN BORDER -- The Trump administration’s decision to end the Deferred Action for Childhood Arrivals (DACA) program not only promises to uproot the lives of close to 800,000 contributing members of society, it also makes them vulnerable to be used as bargaining chips to build a wall and hire more border agents.

Border states have become hyper militarized throughout the years, with thousands of unaccountable agents who are able to stop, frisk and interrogate any community member without probable cause. In fact, states like California and Texas have some of the highest concentrations of DACA beneficiaries, making them vulnerable to Trump’s deportation machine.

In response, the Southern Border Communities Coalition, which brings together more than 60 organizations from across the southern border, issued the following statement:

“While U.S. congressional members are considering passing a bipartisan DREAM Act in lieu of the DACA program, undocumented youth must not be used as bargaining chips during upcoming budget negotiations that would grant legal status in exchange for a wall or more unaccountable border agents. Congress instead must move quickly and pass a bipartisan, straightforward DREAM Act that creates a path to citizenship for DREAMers. Elected congressional members must not stand by and allow President Trump to destroy the lives, families, and livelihoods of these talented young aspiring Americans. Nor should Congress waste billions of dollars on a senseless wall, more Border Patrol agents or more detention centers. This is the time to take a stand to protect our youth, families, and communities.”