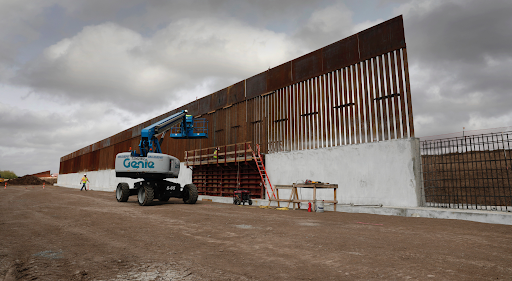 “The president is doubling down on his unlawful scheme to raid taxpayer funds for a xenophobic campaign promise that is destroying national treasures, harming the environment, and desecrating tribal lands,” said Dror Ladin, staff attorney with the ACLU’s National Security Project. “We’ve stopped him before and are returning to court to stop him again,”

The lawsuit was filed in the Northern District of California.

The same court last year issued multiple rulings finding that the president’s initial transfer of over $6 billion in military funds for the wall was unlawful. The rulings came as part of the organizations’ ongoing lawsuit, Sierra Club v. Trump, challenging the president’s abuse of emergency powers to secure border wall funds Congress denied. The administration’s appeals of those rulings are currently pending before the Ninth Circuit Court of Appeals, with the most recent appeal scheduled for argument on March 10, 2020.

“Multiple courts have already ruled that President Trump has no authority to take billions from service members for his wall obsession. Not one court has said Trump’s power grab is legal,” added Ladin.

The Supreme Court temporarily allowed the administration to begin wall construction pending the appeal process, but has not yet decided the case or given the president’s abuse of emergency powers the stamp of approval.

“Trump’s obsession with building his dangerous and deadly wall using illegally diverted military funds is a complete disregard for the checks and balances that are integral to our democracy,” said Vicki B. Gaubeca, director of the Southern Border Communities Coalition. “These irresponsible and dangerous walls don’t make us safer, but do harm border communities and wildlife. We must stop Trump’s unconstitutional cash grabs and move towards a New Border Vision where human rights are respected and all communities feel safe.”

The organizations note in their filing that the Constitution assigns Congress, not the president, the authority to decide how taxpayer funds are to be spent. The president cannot circumvent the system that is enshrined in the Constitution, essential to the democratic process, and critical to ensuring taxpayers have a say in how their hard-earned dollars are spent.

“The Trump administration’s illegal transfer of billions of dollars for wall construction has created a disaster in the borderlands,” said Gloria Smith, Managing Attorney at the Sierra Club. “The destruction of cultural sites, Tribal burial grounds, endangered species, protected cacti and water resources shows that Trump will stop at nothing for this wall — not irreplaceable resources nor the Constitution. Trump wants a blank check for these destructive projects, but it is imperative that the courts continue to halt his egregious abuse of power.”