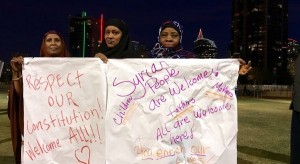 About 350 demonstrators gathered Thursday evening in support of refugees, amid a global debate about refugee resettlement that has intensified in recent weeks following deadly terrorist attacks.

The issue is particularly poignant in San Diego County, where as many as 3,000 refugees are resettled each year. The county has consistently admitted the most refugees in California for the past seven years, according to state data.

The presence of Syrian refugees has become particularly contentious after terrorist attacks killed 130 people in Paris in November. Authorities said one of the attackers entered Europe with a passport that falsely identified him as a Syrian, spreading fears that the Islamic State is infiltrating the tens of thousands of refugees pouring into the European Union each month.

“I feel that it’s important to advocate for the rights of Syrian refugees and their safety, as well as their human rights,” said one of the demonstrators, Hayatt Yasin, whose parents are refugees from Ethiopia. “It’s important that we address issues like these because a lot of the time it gets swept under the rug and it’s really sad because it’s times like these when we need humanity.”

“It is true that we are not going to know a whole lot about the Syrians that come forth in this process... That is definitely a challenge,” Homeland Security Secretary Jeh Johnson recently told a House committee. “We know that organizations like ISIL might like to exploit this program.”

San Diego Muslims at the event also expressed concerns about scrutiny of their religion.

A husband-wife duo suspected of killing 14 people at the Inland Regional Center in San Bernardino last week were radicalized Muslims who plotted the attack for at least two years, according to federal officials.

“Today we are hearing the echoes of history, and recognize that the Islamophobic rhetoric could lead us down a hateful and shameful path that is reminiscent of Japanese internment camps and our failure to shelter victims of the Holocaust,” said Ramla Sahid, executive director of the Partnership for the Advancement of New Americans in San Diego, an organization that aids refugees.