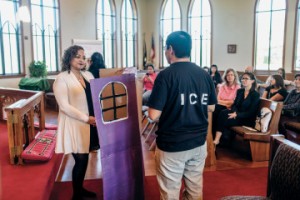 'What can we do if someday la migra comes to my home?'

On an almost balmy winter day, Yasmin, an undocumented woman, settled into a pew at St. John’s Episcopal Church in North Austin for a lesson on what to do if immigration agents were ever to knock on her door. Yasmin, who asked that her last name not be used, had become increasingly worried as the news swelled with stories about immigration sweeps in several states, including Texas. The controversial raids targeted 121 Central American mothers and children with pending orders of deportation. Yasmin, a mother of two U.S. citizen children, came to the United States from Mexico 11 years ago and fears the same could happen to her and her family.

“My husband is an [undocumented] immigrant too,” she told the Observer. “What can we do if someday la migra comes to my home?”

In response to such questions, Austin City Councilman Greg Casar — the son of Mexican immigrants whose district is heavily undocumented — convened the meeting at the church to educate his constituents on how to respond should ICE carry out more raids. In Austin, about 800 undocumented families have outstanding orders of removal, according to the University of Texas immigration law clinic.

“Instead of feeling powerless about it and saying there is nothing we can do, let’s at least do what it is that we can, which is education and organizing work,” Casar said.

Drawing about 40 people on a Saturday, the “Know Your Rights” meeting featured attorneys, who provided an overview of the federal immigration raids, and advocates, who shared instructions on what to do should a law enforcement officer show up unannounced. There’s no requirement to respond or let officials inside without a signed warrant, they said.

“Your name and your birthday — that’s all the information you have to give,” Alejandro Caceres, an immigration rights advocate with the Austin nonprofitGrassroots Leadership, told the audience. Caceres, who donned an ICE T-shirt and paper badge to play an officer in an educational skit, assured meeting attendees that if they are inside their homes, they do not have to answer specific questions about immigration status. “You have the right not to say anything. You have the right to an attorney.”

The Workers Defense Project, an organization that advocates for the rights of workers and immigrants, hosts similar workshops each week in its Austin and Dallas offices. Workers Defense also provides attendees with “Know Your Rights” cards to carry around in their wallets, with instructions and helpful phone numbers. Organizations in other cities, such as Houston, and other states, including Maryland and Virginia, are also hosting know-your-rights trainings.

Rose Levy, a Workers Defense organizer, said interest in the organization’s workshops has grown since the announcement that the U.S. Supreme Court will review the Obama administration’s deportation relief programs, known as DACA and DAPA. Whatever comes next, with the raids or the Supreme Court decision, “we’re going to keep doing what we’re doing,” Levy said.