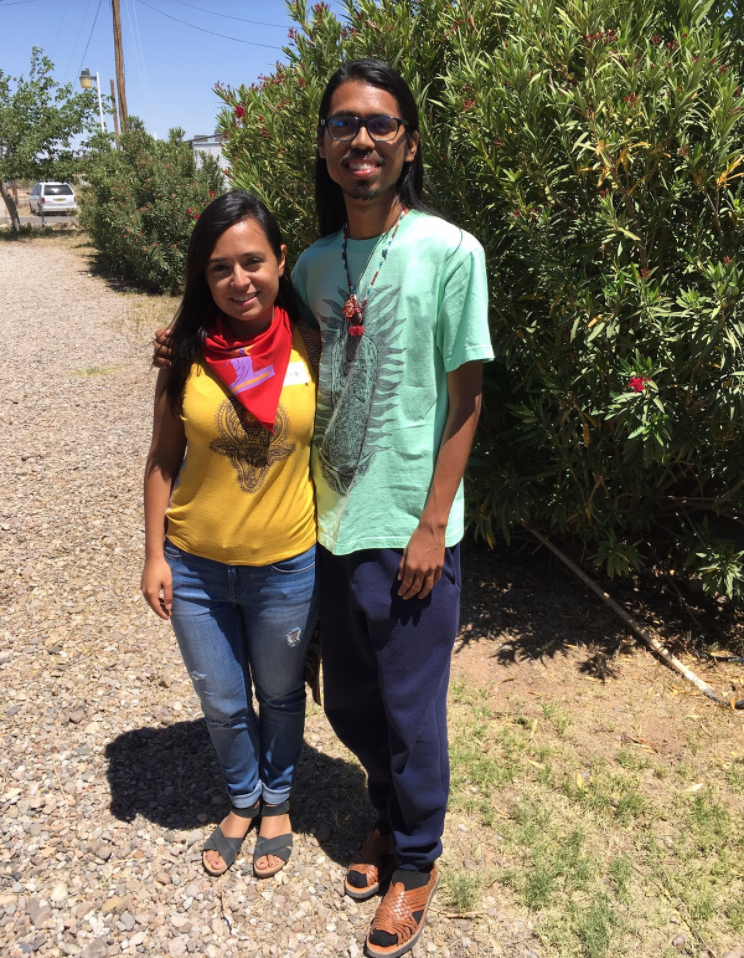 On April 21, the Caravan Against Fear stopped in Las Cruces, New Mexico before moving onto Texas, the last of the southern border states. During our stay in New Mexico, we had the opportunity to meet and stand in solidarity with local Las Cruceans in support of their efforts to get the Las Cruces City Council to pass a Welcoming and Freedom City Resolution. The press conference and rally was organized by the American Civil Liberties Union (ACLU) of New Mexico, a local SBCC partner organization, along with others.

As we learned in Las Cruces, similar to the reality lived on rest of the border region, Border Patrol checkpoints serve to divide communities. The presence of agents is a normalized reality.  In today’s political climate, there is fear and anxiety among families and young children in mixed-status families, who fear they might be separated. Many refrain from reporting crime and abuse to local law enforcement for fear of being deported, and don’t venture far from home.

During our visit, I had the opportunity to learn more about Las Cruces and the border reality in Southern New Mexico thanks to Cynthia Pompa, a field organizer for the ACLU of New Mexico Regional Center for Border Rights. See below for part of our conversation:

CP: My name is Cynthia Pompa, I work at the American Civil Liberties Union (ACLU) of New Mexico Regional Center for Border Rights as a Field Organizer. I’ve been here for over two and a half years. I am originally from Juarez/El Paso. I was born in El Paso, but grew up in Juarez. So, I grew up crossing the border every day to go to school in El Paso. After being away for about seven years, I came back to the border region, and it’s been very fulfilling and rewarding to work towards a better quality of life for all the people who live here.

CP: In Southern New Mexico, Border Patrol checkpoints divide communities perhaps more so than in other parts of the border, to the point that it disrupts people’s journeys. The main university in the south is in Las Cruces, and there’s numerous smaller towns around, but on the way here, there’s a Border Patrol checkpoint. We’ve heard stories about students, from Deming, NM, about an hour away, who decide to go to NMSU in Las Cruces and their parents don’t have immigration status, so they haven’t seen each other for years just because they decided to go to school an hour south. The main airport is in El Paso, TX and between the airport and Alamogordo, NM, there’s a border patrol checkpoint. There’s parents who have to take their kids to high school district soccer game competitions and on the way, there’s a checkpoint. I think that’s definitely a difference from other border regions. Border checkpoints divide our entire community, and that’s because Southern New Mexico is economically impoverished, most of the [necessary] services are in the bigger cities (i.e. Las Cruces, Alamogordo). If you live in Otero County, in Chaparral, you have to go to Alamogordo, NM, and on the way, there can be a checkpoint, but at the same time it’s New Mexico. I lived in Texas for many years and I feel more welcomed in New Mexico. People in New Mexico are very welcoming and very relaxed, they have a lot of pride in their natural resources and outdoors, but I think those are the main differences I see.

Q: What are the main challenges your community faces as it relates to border enforcement and border security?

CP: Three or four years ago, there was a lot of collaboration between local police and Border Patrol in Doña Ana County, like visibly, everywhere. Since then, we’ve worked really hard with other organizations to change that. We’ve even passed resolutions and while I think it has decreased a lot, it still happens and it's like a scar in the community. If we go out and give Know Your Rights presentations and say “local police shouldn’t enforce immigration laws,” sometimes people will say “yeah, right, they do it all the time!”. I think that trying to make sure it doesn’t happen is still part of our work. Since the new administration started, I think the fear to report domestic abuse and violence is growing again because who knows what will happen if people report.

Q: What would you like to say to lawmakers and administration officials who visit the border but only meet with the Border Patrol and other security officials but rarely meet with community members?

CP: To our local elected officials, our senators, what we’ve been telling them is that they really need to stand strongly for us, and they need to make sure that we feel like they have our back. Securing the border might make someone in Iowa feel safer but it definitely doesn’t make us feel safe. People are telling us that more law enforcement does not make them feel safe, if [safety] is the goal, then these leaders are failing at that.

What does a better border mean to you?

Q: What are your hopes for the caravan while it's here in your region?

CP: Our community already received an injection of fresh energy because I think that [since] Las Cruces is small, I think there’s a lot of people fighting for Southern New Mexico but it’s been really discouraging the last few days. So it was really cool to see people from far away from here literally standing next to us and yelling "No Fear”.

Q: What impact do you hope the caravan has at a large scope?

CP: I hope the caravan can elevate the message we’ve been working for, that the border is alive and thriving in many ways. There is a lot of life and lots of people with hopes and dreams like the rest of the country. We hope that the caravan takes with them, the stories that they've heard and that the rest of the country is able to take that with them as they push their representatives to create policies that affect us.

Q: Is there anything else you'd like to add that I didn't ask or that relates to what we've been talking about?

CP: Never before have we seen a “Caravan Against Fear” drive along the southern border and feel really connected with people who are fighting for their dignity in the workplace and in other areas, here in the border. I see the silver lining in all of this and really feeling connected to people in this movement and so it gives me hope.