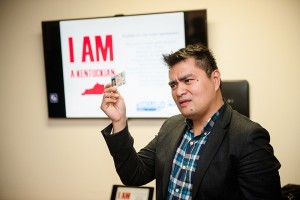 Jose Antonio Vargas is a Pulitzer Prize-winning journalist-turned-documentary filmmaker and immigration activist. Now he wants to add another title to his resume: publisher.

Vargas, who revealed in 2011 that he's been living in the U.S. illegally since the age of 12, launched a crowdfunding campaign for a new media venture called #EmergingUS. He says the online news organization aims to explore the "evolving American identity."

Vargas spoke KPBS Midday Edition about immigration, race and the presidential race. Here are highlights from that interview.

To me, there is an emerging American identity that most of the media does not cover at all. Just look at the Nevada caucus. Do Asian voters just not exist? It’s not even a part of their equation. We talk about race in America, specifically regarding East Coast based on news organizations — I’ve worked in the East Coast for 10 years as a journalist—and for the most part, the way we address race in America is very black and white, and very outdated.

Why are we still stuck in a black and white conversation when the country has already moved on? What is the responsibility of news outlets to cover what this changing demographic means culturally, economically, politically? #EmergingUS is all about that. Instead of getting investors, nested in a corporate media conglomerate entity, we decided to be independent. So we’re going to the crowd to raise one million dollars. This is something that has never been done for crowdfunding in journalism.

You’re in San Diego and you’re talking to young voters about race, privilege and immigration. What are some of the things you’re hearing from college students?

This is going to be a turnout election, right? I’m undocumented, I can’t vote. I always get very frustrated and surprised and disappointed when I hear people — especially young people who are American citizens and can vote — who aren’t even registered to vote. Do they not realize the price that was paid for them to be U.S. citizens? To have this privilege and right to vote? So I’m always surprised by that.

There’s been a lot of talk about immigration in a lot of different ways on the campaign trail. What have been some of your impressions so far?

I see this from the prism of being a journalist — where facts are to me, a religion — and I see it as someone who is an undocumented immigrant. The general failure of the media to report the facts and contextualize this issue is bordering on criminal. Considering how much we talk about this issue, it is so irresponsible how little the public knows about what the process is for somebody to get documented, and what the facts are in regards to how much of the population is undocumented.

Let’s talk about Texas. There is about 1.7 million undocumented people in the state of Texas — the second largest outside the state of California. Half of construction workers are undocumented. Where would Texas economy be without undocumented workers? And yet, instead of talking about what they contribute, in terms of social security and taxes, what is the narrative? The narrative is that they just take, take, take. They’re the one’s taxing welfare, they’re the ones causing all this trouble. The facts are just not there to bear that out.

And yet the media, I’ve heard Marco Rubio say, on the last CNN debate and on Meet the Press with Chuck Todd, “Illegal immigration has been the worst in the past five years.” Study after study, from the Pew Research Center, from the Center for Migration Studies, have said this is actually the lowest number of undocumented people in America since 2003. Why can’t we call them out when candidates say something factually wrong?