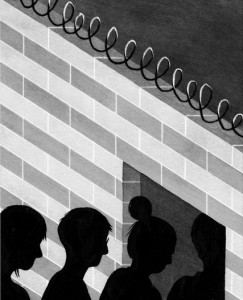 By New York Times Editorial Board

Turn away, for a moment, from the generalized idiocy of the presidential campaign to consider a specific instance of monumental dimness. It happened Wednesday.

The National Border Patrol Council, which says it represents 16,500 border agents, endorsed Donald Trump. It says it has never endorsed a presidential candidate in a primary before, but these are dire times.

“There is no greater physical or economic threat to Americans today than our open border,” says the endorsement, signed by the council’s president, Brandon Judd. The union “asks the American people to support Mr. Trump in his mission to finally secure the border of the United States of America, before it is too late.”

Too late for what? The collapse of America, apparently, from the “gangs, cartels and violent criminals preying on the innocent.”

It’s tempting to dismiss this as the usual politicized cop-talk, par for today’s course. But it’s far more dangerous and fraudulent than that. The lies behind it have preoccupied the country for a generation, consuming billions of dollars for miles of walls, razor wire, drones, sensors and a surge of agents and troops.

Despite the union’s apocalyptic warnings, the border is more militarized than ever, and arrests there are at historic lows. Illegal immigration has been falling for years. More Mexicans are leaving the country than entering. President Obama, far from abandoning immigration enforcement, has deported more people — more than two million — more quickly than his predecessors. A recent migrant influx in Texas consists of terrorized mothers and children fleeing Central America, trying legally to seek asylum. They deserve protection and the due process of law, not the administration’s aggressive efforts to deter and deport them.

The vast proportion of the 11 million unauthorized immigrants who are already living here are not criminals, don’t think or behave like criminals, and deserve a chance to stay, as immigrants have always done.

This is the truth, but truth hardly matters to politicians who prey on fear and hate. Those were the emotions Mr. Trump was summoning when he built his campaign on a cry about rapists and drug smugglers from Mexico and a promise to build a wall, deport the 11 million in two years and keep out Muslims.

Mr. Trump’s immigration views are driven by defiant ignorance. That they should be embraced by a union whose taxpayer-paid members are the face of the immigration policies of the United States is appalling.

If union leaders had their members’ interests in mind, they would not be aligning with vigilantes and nativists, birthers and borderline lunatics. They would know better than to view all unauthorized migrants as a class of hardened criminals, and they would treat as a delusion Mr. Trump’s plan to deport 11 million people in two years and to let “the good ones” back in.

But instead of informed discussion, there are Trump-level tirades. Listen to the national council’s podcast, “The Green Line,” and you can hear the hosts denounce the Black Lives Matter movement and assail Mr. Obama for supposedly not saluting the Marines who guard his helicopter. Their podcast begins with a ludicrous bit of audio from “Game of Thrones,” a character reciting a watchman’s oath: “I am the shield that guards the realm of men.”

That is the fantasy claptrap that feeds the thinking that dehumanizes migrants, that tolerates reckless violence by border agents, like the shootingof an unarmed child, in the back, through the fence, into Nogales, Mexico — one disturbing episode among many. It reveals an attitude that condonesabuse and cruelty toward those in custody and justifies the profiling and harassment of drivers on the highway. And that perspective, not surprisingly, finds common cause with Mr. Trump.