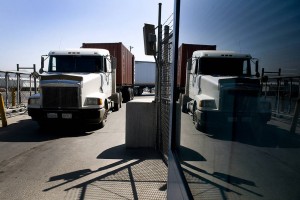 A new electronic customs system is off to a rocky start, with some shippers reporting their goods held up at the U.S. border for hours.

The technology, which the U.S. Customs and Borders Protection began phasing in on Thursday, is supposed to automate the filing of customs forms and transmit data gathered from shippers to nearly 50 government agencies.

But problems arose almost immediately, with some users receiving “system failure messages” and others waiting hours at border points of entry, said Celeste Catano, a logistics software specialist with Kewill Inc. who has been advising Customs on the new system. The delays affected a small number of shipments, mainly along the Mexican and Canadian borders, a group representing freight forwarders said.

“The [filing] system did not go down completely, but they did have many issues,” Ms. Catano said.

By early Monday afternoon, Customs issued another update reporting that the problem had been fixed, all pending filings were being processed and users would be notified once the backlog was cleared.

A spokesman for Customs said in an emailed statement Monday night that the agency regrets the slowdowns and other problems users experienced. Technical experts working around the clock “have increased monitoring of ACE system performance to address any additional need for faster response times while maintaining the security and integrity of the system,” the statement said.

“Somebody orders something, it gets on a truck within an hour and the data is sent down” to Customs, Mr. Powell said. “If they get a 20-minute or 30-minute delay in getting a response back, that truck can’t cross the border.”

He added that the number of users affected was relatively small, with delays affecting less than 1% of shipments coming into the U.S.

Known as the Automated Commercial Environment, the new system has been in the works for years. ACE is meant to simplify the movement of goods across the border by collecting data required by various federal agencies in a “single window.” Previously, shippers had to meet a variety of requirements and deadlines. The system is being phased in over the course of the year.

Customs has repeatedly postponed ACE’s rollout to give government agencies and the private sector more time to prepare. Many in the trade community have complained about how long it has taken Customs to develop the new system and the resulting costs associated with years of developing software on the private side to work seamlessly with the new system. All shippers are supposed to switch over to the system by the end of the year.

Mr. Powell said Customs made the right choice in taking a gradual approach, given the delays.

“If we were mandated to be on this system for everything, we’d be in a whole heap of trouble right now,” he said.