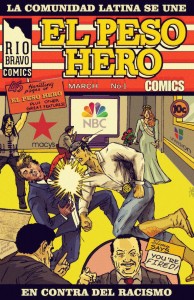 “El Peso Hero” is not your typical comic book. Created in 2011 by Hector Rodriguez—an elementary school teacher in Dallas and the founder of Rio Bravo Comics—the series focuses on life on both sides of the United States-Mexico border.

The eponymous main character defends immigrants against drug cartels, human traffickers and corrupt officials. He stands up for the rights of the disenfranchised and fights all forms of injustice.

Humble and poor, El Peso Hero lives in a fictional town in Mexico called Los Brazos. According to The Dallas Morning News, his name refers to “the low-return Mexican peso,” and he remains true to his Mexican roots. Though he understands English, he speaks only Spanish.