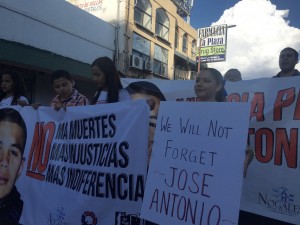 From October 7 to 10, over a thousand people gathered in Tucson and Nogales, Ariz. for a U.S./Mexico Border Convergence against the militarization of the border, border patrol violence and murder, and the division and imprisonment of immigrant families. The weekend of action was sponsored by the School of America Watch and included representatives from nearly 400 organizations from across the country.

The weekend was started with a mass vigil at the Corrections Corporation of America’s Eloy Detention Center in Pinal County, Ariz. on Friday. The Eloy Detention Center has been under special scrutiny as the deaths at Eloy represent over 9% of the total deaths of detained immigrants in a system of more than 250 facilities nationwide. A total of 14 people have died including several high-profile suicides. In one case, Guatemalan immigrant Manuel Cota-Domingo died due to complications related to his diabetes after his cellmate spent hours through the night banging on the door in a desperate attempt to get medical care.