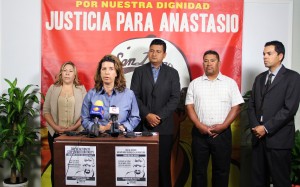 By Brian Bennett and Joseph Tanfani

The family of a Mexican man who died after he was shocked with a Taser and hit by U.S. Customs and Border Protection agents has asked an international panel to consider whether his human rights were violated.

The family of Anastasio Hernandez-Rojas, who died of a heart attack days after a confrontation at the San Ysidro border station in San Diego in May 2010, has asked the Washington-based Inter-American Commission on Human Rights to investigate the human rights record of U.S. border agents and customs officers.

The 61-page petition marks the first time the commission has been asked to consider a death at the hands of U.S. Customs and Border Protection agents and officers. It also marks another  attempt by the family to hold agents accountable in a high-profile case that advocates say reflects a culture of impunity for border agents.

In November, the U.S. Justice Department decided not to bring charges in the Hernandez-Rojas case after a five year investigation found “insufficient” evidence to prove that border agents had “willfully” caused his death.

The commission, which is part of the Organization for American States, has investigated patterns of extrajudicial killings, including the 1982 Plan de Sanchez paramilitary murders in Guatemala and the 1991 Barrios Altos massacre by the Peruvian Armed Forces.

The panel's seven members represent seven countries in the Western Hemisphere. The current president is James Cavallero, an American expert on human rights law and a professor at Stanford Law School.

The petition filed Wednesday seeks to "expose a pattern of impunity and abuse at the border," said Roxanna Altholz, associate director of the International Human Rights Law Clinic at UC Berkeley School of Law, who helped prepare the complaint.

"This is also an opportunity for the U.S. to reform its criminal justice system and ensure these kinds of violations aren't repeated," Altholz said in a telephone interview.

A spokesman for U.S. Customs and Border Protection did not respond to requests for comment.

Hernandez-Rojas had been caught crossing the border illegally and was being taken back to Mexico, when, according to U.S. agents, he began kicking and punching them. The agents said Hernandez-Rojas continued to struggle even after he was handcuffed and hit with batons while on the ground.

One agent shocked him at least twice with a Taser, and agents zip-tied his legs. Reports show he had methamphetamine in his system; he suffered five broken ribs and a heart attack, and died three days later.

Cellphone videos from witnesses standing at the border crossing showed Hernandez-Rojas screaming for help while in restraints on the ground.

The death became one of the border agency's most controversial use-of-force cases involving a Taser, which fires a painful but nonlethal electric charge intended to subdue a suspect.

A civil suit alleging that the agents used excessive force has been in federal courts for five years. After a district judge ruled against the agents’ claims of immunity, lawyers filed an appeal with the Ninth Circuit. It is still pending.

“Taking this case to an international forum is a step we were forced to take because we had exhausted every other venue in the U.S. to get justice for this family,” Christian Ramirez, human rights director for Alliance San Diego, an organization that promotes social justice, said in a telephone interview.

Nearly six years after his death, Hernandez-Rojas' family has continued to press for the agents involved to be disciplined or charged with a crime.

"We are looking for justice," Hernandez-Rojas' younger brother Bernardo, 44, said shortly after he arrived in Washington to file the petition. "We want to make sure others won't have to suffer as we have."