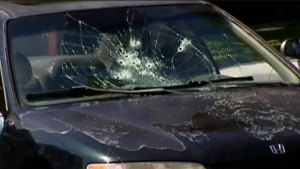 San Diego: Today, September 28, marks 3 years since U.S. Border Patrol Agent Justin Tackett shot and killed Valeria Munique Tachiquin in the City of Chula Vista, a San Diego suburb. Valeria Munique was a 32-year-old mother of five and a US citizen who was killed by a federal agent with a history of civil and human rights violations at his previous career as an Imperial County sheriff's deputy. In a termination letter issued by Imperial County Sheriff's Department Chief Sharon Housouer, Tackett was described as a deputy who could not be "trusted with a badge or a gun," yet the Border Patrol hired Tackett. He ended up killing Valeria who was not the subject of the search warrant being served that day.

Her story is one of 40 who have been killed by Customs and Border Protection agents since 2010, and in none of those cases has an agent been held accountable.

Three years ago our lives changed forever when, without justification, Border Patrol agent Justin Tackett shot and killed my daughter, Valeria. To date the investigative agencies continue to keep us in the dark about whether a criminal investigation is moving forward. In these three years we continue to feel Valeria's loss and our pain is not any less.

The authorities have an obligation to keep us informed of how the investigation is proceeding. In not doing so continues to devalue my daughter's life and that of her children. My family is committed to seeking justice for Valeria and for my family and we will not stop until all of our questions are answered.

The case involving Justin Tackett is emblematic of the systemic problems within Customs and Border Protection. From the lax hiring standards and improper training to the lack of transparency and accountability. Neighbors and witnesses of the shooting shared testimonies that conflicted with the Border Patrol's official account of what happened on September 28, 2012, calling to question the agency's credibility.

The incident that led to Valeria's death and others who have been killed by CBP in the past 5 years has elevated the issue of border militarization and lack of accountability to a national level and calls for reform of the agency have come from independent oversight committees such as the CBP Integrity Advisory Panel, the Police Executive Research Forum and the United Nations.

The Southern Border Communities Coalition (SBCC) brings together more than 60 organizations from San Diego, California, to Brownsville, Texas, to ensure that border enforcement policies and practices are accountable and fair, respect human dignity and human rights, and prevent the loss of life in the region.