Justice Department says it will end use of private prisons 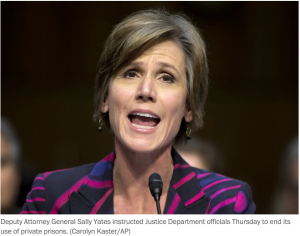 The Justice Department plans to end its use of private prisons after officials concluded the facilities are both less safe and less effective at providing correctional services than those run by the government.

Deputy Attorney General Sally Yates announced the decision on Thursday in a memo that instructs officials to either decline to renew the contracts for private prison operators when they expire or “substantially reduce” the contracts’ scope. The goal, Yates wrote, is “reducing — and ultimately ending — our use of privately operated prisons.”

“They simply do not provide the same level of correctional services, programs, and resources; they do not save substantially on costs; and as noted in a recent report by the Department’s Office of Inspector General, they do not maintain the same level of safety and security,” Yates wrote.