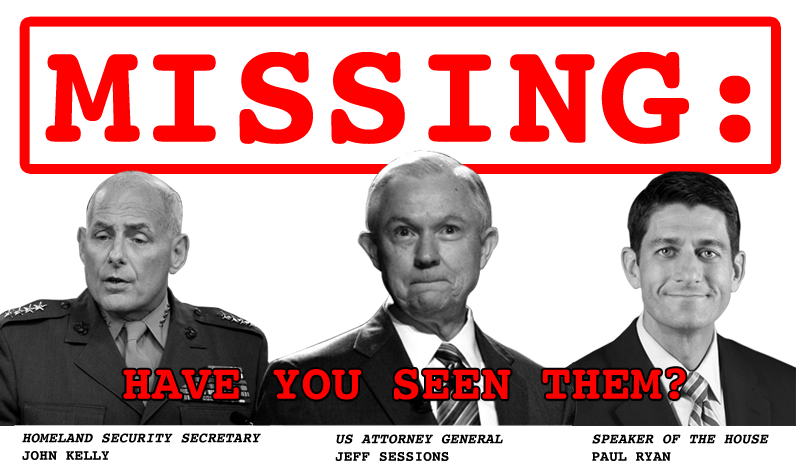 Southern Border Region - Attorney General Jeff Sessions will be the third high-ranking official from the Trump administration to visit the southern border region without meeting with those most affected by the proposed wall and increased militarization: the residents of border communities.

Sessions will be visiting Nogales, Arizona to meet with law enforcement and military personnel officers on Tuesday, April 11. Before Sessions, Speaker Paul Ryan visited McAllen, Texas in February; and before him, DHS Sec. John Kelly also toured Texas, Arizona and California --all of them without meeting with any members of the community.

Juanita Molina, a member of the Southern Border Communities Coalition and Executive Director for Border Action Network and Humane Borders in Arizona, issued the following statement:

“It is absurd that Jeff Sessions is traveling to our back yard to discuss policy that will affect us and exclude us from the conversation. Border residents deserve to have a say in decisions that impact our communities. We expect a seat at the table with lawmakers to ensure that policies uphold our values.

Instead of meeting with law enforcement agencies, many of which are disconnected from our communities, Mr. Sessions should be meeting with us to get a better sense of what we need, which includes better schools, better infrastructure, and better healthcare. As a border resident, I can tell you that increased militarization and a wall are not on our list of needs.”

“I am appalled, but not surprised, that Attorney General Jeff Sessions will come to the borderlands and only meet with Border Patrol and select law enforcement officers. He made many trips to the border as a US Senator, and only met with folks that would stroke his preconceived plans of more walls and more Border Patrol agents for our community. It should not be too much to expect for him to come and actually meet with the broader community. Because if he did, he would learn that our border communities are the safest in the United States, that immigration numbers are actually in the negative---more people are returning to Mexico and Central America than are crossing into the United States, and that what we really need to be about is building schools, neighborhoods and parks.”


The Southern Border Communities Coalition (SBCC) brings together organizations from San Diego, California, to Brownsville, Texas, to ensure that border enforcement policies and practices are accountable and fair, respect human dignity and human rights, and prevent the loss of life in the region.
###