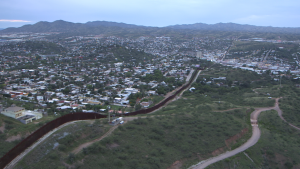 INDIANAPOLIS (April 5, 2016) – The head of U.S. Customs and Border Protection is calling Donald Trump’s plan to build a wall along the U.S.-Mexico border “impossible.”

R. Gil Kerlikowske, the federal agency’s commissioner, met with economic and law enforcement leaders in Indianapolis Tuesday. The visit was part recruitment, part policy for Kerlikowske, who was appointed by President Barack Obama to oversee the agency and its 60,000 employees.

In an interview with CBS4, Kerlikowske was critical of the Republican presidential front-runner’s immigration proposal.

"Well I would say that anyone who's looked at the border and gives a simple answer on how to solve a very, very complex problem should realize that at any time you give a simple answer to a complex problem, it's most often wrong,” he said. “Building a wall would be an impossibility. We know that from the environment.”

Kerlikowske also addressed other controversial border measures, like Indiana Gov. Mike Pence’s ban of Syrian refugees last fall, a ban that was later thrown out by a federal judge.

“There is an unbelievably and difficult and complex process to achieve refugee status,” he said. “People are fingerprinted, photographed, interviewed multiple times and checked. And the process takes almost two years, so if you really thought about somebody who wanted to do harm to this country or some other country, there’s probably some easier ways to try and do that, than to subject yourself to two-years worth of screening.”

Critics of Kerlikowske accuse the Obama administration of playing politics.

For the first time ever, the union representing border agents endorsed a presidential primary candidate, that being Donald Trump, saying “the lives and security of Americans are at stake.”

“I would clearly tell you in meeting with literally thousands of border patrol agents, they’re very interested in doing their job and doing their job professionally and not engaging in the politics of their union,” Kerlikowske said.

For his part, Kerlikowske told CBS4 he’s focusing on security, not politics.

“So I would tell you people need to be very realistic,” Kerlikowske said. “We don’t live in a crime-free community, whether it’s Indianapolis or the state of Indiana, and we certainly don’t live in a world in which the border can be protected against every possible intrusion.”