How One Man Is Hoping To End The U.S. Border Protection Agency’s ‘Culture Of Impunity’ 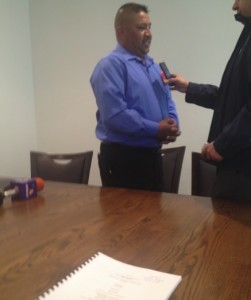 WASHINGTON, D.C. — Six years ago, U.S. Customs and Border Protection (CBP) agents beat, discharged a taser, and killed Anastasio Hernández Rojas, an undocumented Mexican immigrant, as he faced removal from the United States at the San Ysidro Port of Entry in California. At the time, Hernández Rojas had re-entered the country likely to reunite with his five U.S.-based children.

Eyewitness video evidence of the incident showed over a dozen officers surrounding and beating Anastasio as he was handcuffed and laying face down. Agents later said that he had been uncooperative, struggling with them as he was being repatriated back to Mexico. One agent shocked him upwards of five times, telling him to “quit resisting” despite him lying on the ground,video evidence indicated. One of his last words were “ayúdame,” or help me.

Hernández Rojas died of a heart attack while being restrained, according to a medical examiner who also ruled his death a homicide. The Department of Justice (DOJ) announced in November 2015 that it would not pursue federal criminal civil rights or other federal charges against the federal agents involved in the in-custody altercation, citing “insufficient” evidence.

But on Wednesday, Anastasio’s brother Bernardo and other representatives came to the nation’s capital to file a petition with the Inter-American Commission on Human Rights and a lawsuit against the U.S. government for a “failure of justice, for the impunity that they have exercised for allowing agents at the U.S. – Mexico border to kill a father of five,” Andrea Guerrero, executive director of Alliance San Diego and co-chair of the Southern Border Communities Coalition, said during a press conference.

The petition is the first time that the commission has been asked to look into an extrajudicial killing by border agents. It was also a way for the Hernández Rojas family to hold agents accountable for a case that supporters believe demonstrates the agency’s continued use of deadly force without consequences.

“In the 90-year history of the United States having border agents, never ever, ever have we prosecuted successfully an agent for the harm that they have inflicted against a resident of the border region,” Guerrero said, explaining that the petition aims to end that culture of impunity. “This case would have been the first had the U.S. government brought charges but it did not. We’re not going to let this lie. We’re not going to stand for this impunity.”

A civil suit alleging that the agents used excessive force has been languishing in the federal courts for five years, partially spurring Bernardo to move ahead with the petition. Bernardo was particularly “disappointed” when the Department of Justice chose to close the case in November, stressing that he previously met with the department for status updates but was repeatedly told to wait.

One of the biggest asks that the group wanted was for border agents to wear body-worn cameras, noting that the policing world was already thinking of implementing body-worn cameras for law enforcement officers.

“We cannot allow the largest law enforcement agency, CBP, to be exempt, to not have to wear body-worn cameras,” Guerrero said, indicating that the Department of Justice closed the case because the eyewitness evidence didn’t capture the minute before agents started to beat Anastasio. “The agents alleged that in the minute before that video started, that Anastasio was combative and his actions warranted the treatment that he received.”

She said that putting aside some of the problems of the investigation, “if the agents had been wearing cameras that day, we wouldn’t be having this conversation. We believe those agents would be behind bars and they would be the first agents behind bars in its 90-year history.” (The CBP is a merger of the former U.S. Customs Service and the Border Patrol, which is formerly part of the Immigration and Naturalization Service.)

There has been some promising signs that the CBP agency is engaging in fewer deadly force encounters between agents and civilians since the Department of Homeland Security released revised guidelines on the use of deadly force in 2014. In the 2015 fiscal year, agents applied the use of force in 768 incidents, down from 1037 from the year before. And in his final budget proposal, President Obama requested the allocation of $5 million to support the use of body-worn cameras for agents on the southern U.S. border.

Still, the CBP agency has been resistant to body-worn cameras, from delaying its implementation to making excuses that it may malfunction under the desert heat. And it’s been resistant to recommendations to review allegations of misconduct. Earlier in March, a new report from an integrity advisory panel suggested that no progress has been made to implement recommendations.

“My feelings are of hope for justice for my brother’s case and all other cases, and that agents stop doing this,” Bernardo said. “The border is plagued by incidents and people don’t know what’s happening. There hasn’t been one sanctioned agent in all these years.”