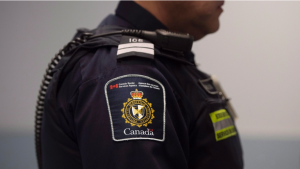 "The most important thing is an expansion in preclearance," Goodale said. "This is the ability to clear American customs and immigration procedures before you leave Canada, so that once you arrive in the United States … there's no further checking of passports and so forth."

Preclearance is already available at a number of airportsacross Canada, including in major cities such as Calgary, Halifax, Montreal, Toronto and Vancouver.

"This will now allow us to expand the list to include, potentially, the Billy Bishop airport at Toronto Island (and) the Jean Lesage airport in Quebec City," he said.

Goodale said the government is also looking at adding preclearance procedures for train routes from Montreal to New York and in Western Canada.

Eventually, he said, the plan is to also examine preclearance options for shipping cargo across the border.

The goal of the additional preclearance locations is to streamline the travel security process, Goodale said.

"The more you can preclear on the Canadian side, the smoother the whole transportation process is," he said.

In addition to agreeing on new preclearance measures,Canada and the U.S. agreed to increase the amount of border-crossing information they will share with each other.

Under this deal, the countries will share "tombstone" data on travellers. This information could include names and dates of birth.

While the increased information sharing has yet to be approved by the Canadian Parliament, the proposed measure drew criticism when it was announced earlier in the week.

"When you collect a huge amount of information about an individual, it can result in profiling," Pillay told CTV News on Friday.

Speaking on Question Period, however, Goodale touted the agreement as "non-intrusive," and said it would improve security in both countries.

"We've been very careful about the privacy considerations," he said. "The sharing of that tombstone data between the two countries will give us a more complete record (and) enhance our security."

Beyond "tombstone data," Goodale said Canada and the U.S. have also agreed to change how they share "no-fly list" information with each other.

"(Canadian and American no-fly lists) are not up until this point shared with each other," he said. "This arrangement will make it possible for that to happen."

Under the new agreement, Canada will also work with the U.S. to develop a better way of "getting people off the list if they ought not to be there," Goodale said.

"We need an effective redress system," he said.

Conservative Foreign Affairs Critic Tony Clement gave credit to the Liberals for bringing the border agreement "into fruition," but said the previous Conservative government deserved recognition for laying the foundation of the deal.

"This was a continuation of ongoing discussions and announcements we had made," Clement told CTV's Question Period.

Clement pointed to the "Beyond the Border" declaration, which the former government issued alongside the U.S. in 2011.

That declaration called for changes to "enhance security and accelerate the legitimate flow of people, goods and services" between the two nations.

Clement was also critical of whether a future American president would honour the deals Trudeau and Obama agreed upon during the state visit.

"It's great to have this great relationship between President Obama and Prime Minister Trudeau, but there's a shelf-life on that relationship," he said.

"I think the whole visit was nice. I mean, obviously there's a bromance going on," Cullen said. "But it's about the next administration and what happens in Congress next as much as anything else."