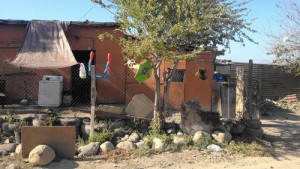 A house in the La Libertad neighborhood of Tijuana relies on the corrugated iron border fence erected under President Clinton for its back wall. The engineers who designed the fence in 1994 left three feet of American soil on the Mexican side, to allow for repairs without the need for diplomatic agreements. That means this home's inhabitants can pass freely between two nations under one roof. The matriarch jokes that, with the way her bed is positioned, she dreams in America while her feet remain squarely in Mexico.

For millions of people in the United States and Mexico, our border fortifications are not about abstract political ideas or campaign promises. They are objects as real as the walls of their houses. Yet, under the national gaze, the boundary has become totemic, standing for the specter of terrorism, demographic change and a thousand domestic ills. No one has worked harder to mythologize the border than candidate Donald Trump, whose experience with the actual boundary is mostly of the fly-over variety.

Trump is making a big pitch for blocking the 1,952-mile boundary between Mexico and the United States with a “beautiful” wall that will help make America “great again.” But his boasts of this wall's height and strength find resonance at an odd time, as the number of people living illegally in the United States is the lowest in a decade, and net migration from Mexico has dipped below zero. How the wall will make us great and its real costs do not figure into campaign rhetoric.

A good look at the exorbitantly expensive and generally ineffective patchwork of fortifications already in place tells us all we need to know about Trump's claims: They're worthless. To put up a concrete structure 35 to 40 feet high, as he keeps saying he would do, will require feats of funding, land acquisition, environmental wrangling and construction that are mind-boggling. Fact-checkers suggest a cost of $25 billion; Mexico is adamant that it won't pony up; and estimators doubt it could be close to done in four years.

The idea of sealing the southern U.S. border goes back a long way. In 1979, President Carter proposed what came to be known as the Carter Curtain — $12 million in fencing at Tijuana and Ciudad Juarez. Every president since has added a layer to the edifice. President George W. Bush signed the Secure Fence Act of 2006. It called for nearly 700 miles of at least “two layers of reinforced fencing,” also at border cities. By 2010, the budget and momentum dwindled, leaving 670 miles completed in various forms at an estimated cost of $2.4 billion. Vast swaths remained a single layer. Some sections were especially expensive — a 3.5-mile stretch in San Diego cost $58 million.

The most immediate effect of the “secure fence” was environmental, as canyons were filled in and the haunts of mountain lions, wolves and jaguars were bisected. In terms of human migration, it worked best as a cost inflator. Anecdotal evidence suggests a three-fold rise in the price paid by migrants crossing with a professional guide in urban locales. But the wall did not stop illicit traffic.

In 2013, I peered over a steel and concrete section of America's fence beside the Libertad house, where a dirt ramp made a viewing platform. The second layer was steel mesh topped with razor wire, about 100 yards into U.S. territory.

The new barrier had already suffered so many patch jobs, it resembled a pair of hobo pants. A former güia, a professional who guided migrants to Imperial Beach from Playas de Tijuana, told me that enterprising drug and people smugglers would sometimes cut a garage-door-size piece from the fence, apply hinges to it and replace it to make a reusable portal. He said vehicles could literally drive through. I didn't believe him until I talked to Border Patrol agent Brian Kelly.

“I've seen it,” Kelly said of a similar hole cut in the fence at Campo, midway along the California border. An expert tracker, Kelly read the results on the ground . “We got burned by five or six vehicles.”

But going to all that trouble to get across the border is actually overkill. Type “border wall car jack” into YouTube's search engine, and you'll see ski-masked smugglers in Arizona defeating our $3.9 million-per-mile barrier with a $24 car jack that raises a single layer of metal-mesh fence between posts set in concrete.

In fact, no matter what we build, people will continue to go over, around, under and through it in every way imaginable: rope ladders, tunnels, jackhammers or car jacks on land; dive-scooters and jet-skis where the fence dead ends in the Pacific Ocean. Even technological defenses can be bested. Laser trip wires and night-vision cameras are defeated by dense ocean fog near Imperial Beach. Seismic sensors buried in the ground are defeated by movement that doesn't pound or shake, but rolls — like bicycles.

Border scholars point to an equation at the heart of the “if you build it, someone will cross it” enterprise. When a society prohibits a good or service for which a market exists — think alcohol, gambling or Mexican labor in the U.S — it immediately injects value into those goods and services. The more resources government puts into defending the prohibition, the more lucrative the market may become, in this case incentivizing creativity, innovation and efficiency on the part of smugglers, guides and migrants.

To my mind, if Trump's concrete wall is built from the Gulf of Mexico to the Pacific, maintaining it would become something like the painting of San Francisco's Golden Gate Bridge: continuous, end-to-end, year after year. In fact, no great wall — not the Walls of Troy, Hadrian's Wall, the Great Wall or the Berlin Wall — has remained intact, and none served the intended purpose for long.

If migrants are coming for economic reasons, long-term solutions lie with fair economic policy. If newcomers are fleeing political turmoil, long-term solutions will be arrived at through just foreign policy. I believe that the ability to say who comes and who goes is a basic component of national sovereignty, but the current strategy of wall-and-defend — of trying to manufacture a solution at the actual boundary line — yields minimal results while exacting a hefty price on our national treasury and collective dignity.